Soon we were passing less urbanised islands.  We passed the first of many resorts; the secluded high class villas and restaurants peeping out between the trees, and little jetties with yachts and dinghies gleaming with their chrome and shiny white hulls.  On the right another island seemed to float on the ocean – a perfectly flat piece of land barely above sea level – I could see the waves on the other side through the palm trees.

These resort islands were tiny, but ahead was a more substantial piece of land.  It was covered with trees and a red and white faraday cage covered with microwave transmitters and receivers poked up five times the height of the canopy.  But we could only see a few buildings on our approach.  We passed a couple of cruisers and turned the eastern corner of the island and now the “metropolis” of Thulusdhoo was revealed.  Behind a number of small boats and one tall ship were a cluster of low roofed warehouses.  And at last we could see some activity on the beach.  The engines on our cruiser were cut down and we drifted gently into a small jetty at the end of one of the streets.  I glanced down into the water – inside the reef it was so glassy, and so shallow that I felt I could put my finger tips through the surface and be already touching the white sand beneath

We disembarked and ambled along a short covered jetty to the main street.  Apart from the odd child and dog, there was no-one around to greet us so we rested in a shelter on the beach.  Around us fishnets were hanging out to dry from trees dotted around the sand.  A gentle breeze made the leaves rustle but there were no other nearby noises.  We sat and chatted about the needs for the project with Mohammed, sitting on cool tiled seats while we waited for our hosts.

It was about fifteen minutes later that a few serious looking gentlemen approached in suits or shirts and ties.  They greeted Mohammed and we were introduced.  They led us off into the settlement behind the beach.  The houses were arranged in a regular grid of streets.  I call them streets but really they were just formed from hardened sand.  But the houses themselves were all substantial concrete buildings, mostly single storey and with airy verandas and neat gardens enclosed with high walls. We were led through a few streets, picking up people en route, and finally entered a more imposing building.  It still was not huge, but appeared to be the council offices for the local district, of which Thulusdhoo was the capital.  Several more men were seated around a table that stretched the entire length of the room.  We set up our laptops next to a projector and squoze into any of the spare plastic patio chairs. 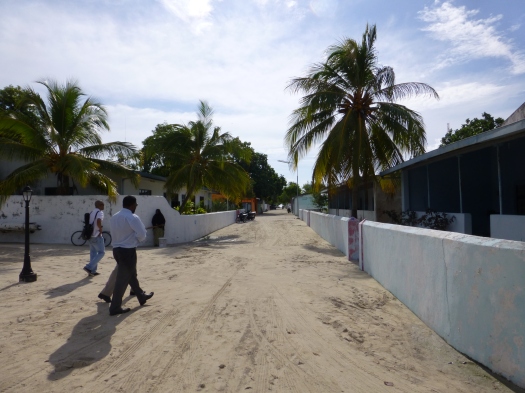 On the sleepy streets