It too was pokey – enough room to walk around the bed but only just – the wardrobe and chest of drawers filled most of the rest of the space.  A stand up shower integrated with the toilet (i.e. they were almost on top of each other) and a TV against the wall of the main room was about all I could expect.  At best I could say they made optimum use of the space they had available.  I thanked the guide and I started to unpack.  As usual if I am in town for more than one night I like to spread my stuff around and put some sort of stamp on this anonymous space.

The window was covered in a thick net curtain. I drew it back and gazed upon a most unusual view of the Maldives.  I could not see the sea.  In fact I could not see much apart from the backs of all the houses and tower blocks around me.  At least I could see beyond the other side of the street as there were a cluster of low rise buildings with tin roofs nestled in amongst the more modern apartment buildings.  Unfortunately the owners of these seemed to consider these roofs as both extra storage space or dumping ground.  The roof opposite was strewn with an old sink, several planks of wood, tubing, a box for some electrical equipment, pots of paint, spare tin roofing, and bits of vegetation that had somehow been left up there.  Let’s say it was not a pretty sight. 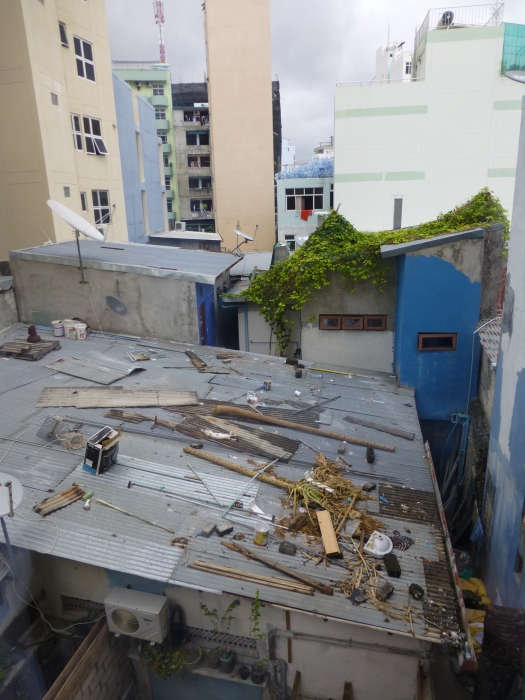 Not your typical view of the Maldives

I drew the net curtain back, took off my travelling clothes and took a quick forty winks – after all I had been travelling for the best part of the last 24 hours, and with spending the wee hours traipsing round Dubai airport, I could do with a bit of catch up sleep.

It did not last very long.  The phone rang and I heard Jeremy’s cheery voice inviting me to join him and our engineer, Dave, in reception.  I quickly mustered together a new outfit (shorts and t-shirt) and headed down the steep steps.