It was a shame we could not get to the temporary fishing settlements in the depths of the swamp to see whether the same attitude to fish conservation was so strong.  And we never got to look down the river beyond the swamp into practices there.  I’d become aware that the fisheries department already split the swamp into five management zones.  Partly this was due to practicalities of getting around this remote area of Zambia, but it partly reflected the different geographies and the fishing practices which went on in them.  It was easy to see the main part of the fishery was the lake and the wetland areas to the south and east.  What I was less certain of was how far down the river we should extend the boundary, and at what point around the edge of the lake and swamp did we say the regulations were to cover.  As well as the main swamp there were long fingers of marshland that extended upriver to the north east in several valleys.  There was also the complex of dambos to the north and west, some containing marshy river valleys, others with smaller lakes and wetland patches.  What did the area have to cover?  As well as to identify what types of fishery and habitats needed to be included,  it was also my job to make the boundary something manageable – i.e. it could be enforced on the ground.  There are a number of options; one it to make it completely natural so it contains the ecosystem you are trying to protect.  This means following natural features but in the case of a fishery it is not wise to split a river in half; it has to be done by watersheds – i.e. make the catchment boundary or highest point from where water drains into the swamp the boundary of the fishery too.  But some ridges are not too obvious, especially in the only slightly bumpy landscape that is common in north west Zambia. 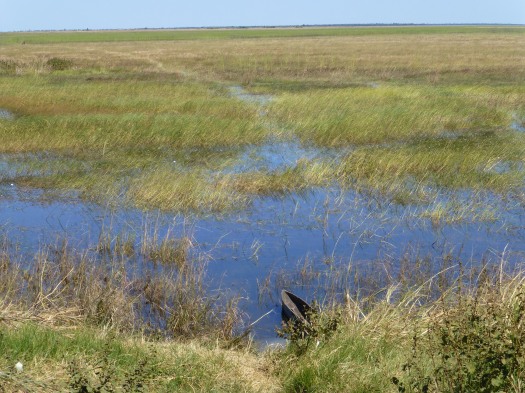 A route across the swamp

I was coming to the conclusion I would need a combination of natural and man-made features to delimit the entire boundary, and occasionally would still need some arbitrary lines drawn in the good tradition of African colonists for centuries.  Even the southern boundary was to be a challenge as Bangweulu Swamp seemed to merge with other swampy lands well beyond where I had been given as an area of interest for my study.