This was likely to be the only chance in my life to go to the Barn, and the others in the group were up for the hike.  So I put my trust in my guides and stepped out on the exposed part of the ridge.  Once on the knife edge, I found it was not as bad as it looked.  I had to keep my wits about me, though.  I kept focused on the path at all times while I walked, and if I wanted to look at the view, I had to stop, ensure I was on a solid piece of ground before attempting to look around.  And looking around could make it worse, as if I looked down I could see little pieces of rock I had dislodged with my feet bouncing several hundred feet down the scree.  The wind would buffet into me and make me unsteady on my feet, but there was little room to spread your legs to get a better stance – the pathway was only one foot wide.

It was with some relief that the group came up against the side of the Barn itself, which offered more protection and meant we could not hear the waves crashing into the cliffs so clearly.  I was at the front of the group and we waited as the stragglers caught up.  One had had a nasty slip that had caused a small avalanche of rocks to fall down.  I hope it had not damaged the path so much we were now cut off!

Our position on the Barn still gave us the views back to Longwood and the Green Heartland but now a secret valley opened up below us – a rocky desert with no trace of human activity.   As the wind whipped the clouds across the sky, the play of light and shadow on the orange rocks below was mesmerizing.  The higher elevation of the Barn obviously caught more moisture than the valley below, our way was marked by a rich set of lichens, tough grasses and prickly pear plants.  Our guide was able to pick our way along a path which easily broke the Barn’s defences.  The path gently ascended the side of the cliff face then turned up a gully which broke out on to the flat top of the Barn.  We were not quite there, ahead was the final ascent for us – the small pimple of rock that was the Haystack.  Now we were up close we could see it was more than just one peak, it was like a Bactrian camel with two humps.  It was a deceptively long walk across the top of the Barn, and the ascent up to the top of Haystacks and the post box was one of the most punishing of the whole walk, but we were rewarded to an elevated position from which to watch the ever changing scene, and the natural cairn of rocks up here gave us a few places to nestle in away from the worst of the wind so we could eat our lunches without the sandwiches ending up in the Atlantic.

Finally on the edge of the Barn – but where now?

Have we just walked along that?

Lunch and time for a sketch

A grand view of the east coast

Huge lichens combed over by years of wind

The Barn was susceptible to low cloud that day and we kept disappearing into the mist or a drizzly soaking rain, but when the mist rose we could see down the east coast of St Helena.  Beyond Longwood was one of the flattest areas on the whole island, an area labelled Prosperous Bay Plain.  Deep ravines surrounded the plain and more curiously shaped peaks – eroded volcanic piles.  One of these was labelled the Turk’s Cap – and if you looked at it at an angle, you could see the folds of the material spiralling up to a pointed peak.  I thought it looked more like a piece of dogshit.

I was fascinated in the vegetation that clung to the edge of the island here.  The lichen had strands which were several centimetres long, and like its more sophisticated vegetation cousins, the trees, they had become windblown and all pointed the same direction northwards.

Reluctantly it was time to head back.  Fortunately the wind had dropped significantly and the sun started to shine so our walk was much more pleasant.  I even took the chance to look over the razor edge ridge and down at the boiling sea.  I was interested to see that instead of seeing just a froth of white bashing against a cliff, there was a rocky beach. Not loose rocks, but solid rock jutting out into the ocean.  It appeared to be a wave cut platform where the sea has pummelled the cliff away, undercutting the solid rock on land until the cliff collapsed.  The loose material washed away to leave these platforms.  They can also form where sea level has changed but it did not look like this from my elevated position – it was just one small slab of flat rock.

As the weather improved the views got clearer

Dwarfed by the Barn

Time for a breather 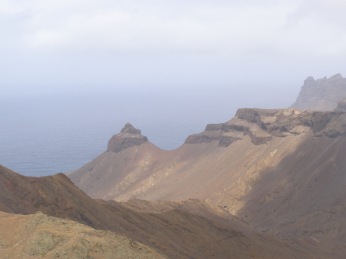 On the narrow ridge 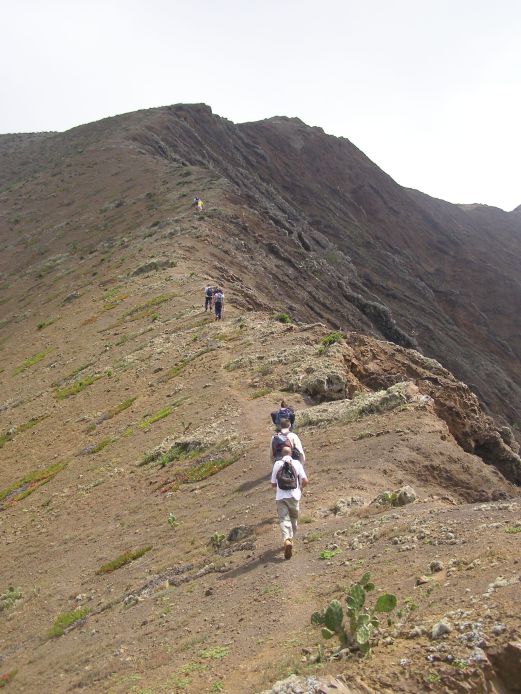 Just below the sheer edge