We returned to the vehicles and thanked our hosts before heading off to the next village, Fintonia.  This was to become a very familiar place to me later in the project, and was where the acting paramount chief lived, the chief of chiefs of all of Tambakha.  The drive was relatively short, relative to the previous day anyway, and in about 45 minutes we were driving across a stream (where naked women were taking their ablutions and who giggled at us as we passed) and into a much more substantial village than Kortor.  A wide street with houses that gave way to a mosque, a community centre and off to one side a health centre.  At the head of the hill was a small roundabout, and we turned down another equally long road of houses.  About half way down the vehicles were parked and we gathered on the veranda of a low house with a rusty corrugated iron roof, some washing hanging outside and a few women sitting on a low wall chatting.  It took some believing that this was the paramount chief’s house.  But there were a few tell tale signs, the most obvious was a large drum hanging from the roof.  A small man wearing a brown safari suit came out from the interior of the house and we all went up to greet him.  The paramount chief had recently died and this man was acting in his place till a new one could be appointed.  He took his seat at one end of the veranda and patiently waited for the meeting to start.

The Paramount Chief awaits the villagers to arrive 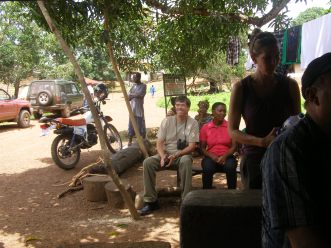 The meeting spills out to nearby shady trees

One of the villagers; I seem to remember he was the secretary for the village, beat the hanging drum loudly several times, and Momoh reassured us that “the elders will be here soon”. And sure enough, one by one various men would walk in, some well dressed, others in wellingtons and overalls, greeting each other and introducing themselves to us.  A large crowd of onlookers had now gathered outside, first brought in by the cavalcade of cars that had passed through the streets, and partly because since the drum had sounded, they knew a big meeting was to happen.

We could not all fit under cover for the meeting, and several people sat on benches provided under the tree; there was a good breeze and it was still just before noon, so it was tolerable for those outside.  The same series of prayers, introductions, explanations and ratifications went on as in Kortor and we then were told that lunch would be provided followed by a tour of the STEWARD activities.  STEWARD maintained an office in Fintonia at the top of the village so we drove up another small street.  The office was one of the most substantial in Fintonia, and painted brightly in green and white.  It had a small compound round the back where cars, motorbikes, generators and other knick knacks were kept; the edifice itself contained a couple of offices and a spacious veranda both front and back.  In the centre of the back yard was a large satellite dish, which provided the only solid outside communication with the world for miles around.  You could not even get a mobile signal round here.  I had brought my laptop with me, taking it out of its bulky case and wrapping it carefully in amongst most of my clothes and wrapped in a kikoy.  It proved that it went on a bumpy and useless journey as I never turned it on once for the whole trip.  But there were others who could not resist downloading their emails.  So while we sat on the veranda and waited for lunch, they retreated into the offices and gawped at their screens.  A lady turned up with several helpers carrying a pile of white plates, several heavy enamelled pots and ladles.  She laid them out on a table an invited us to partake.  Taking a huge chunk of sticky rice, and pouring over a chicken in peanut sauce spiced up with some chilli, and drawing a glass of water from a nearby plastic barrel, we tucked in to our hot heavy lunch in the midday heat.