We started out survey by walking clockwise round the island.  By my calculations the coast was no more than 3km but it was not all Bounty adverts and beauty calendars.  There were some nice sandy stretches true, but the first part in particular was sharp knobbly coral rock and rubble.  We logged all the features we could see.  Any jetties (that might potentially clog up the natural dynamics of the sand on the beach), bits of sea defence, walls, sewage pipes.

As we started moving away from the eastern shore the beach was more settled.  We saw a lot more sand and the water itself was calmer and less damaging.  Not only were the palm trees protected, but other trees hung down into the water, or grew in the sand itself.  We started to see some mangroves.  In front of us was a long stand of mangroves then a substantial channel on the sand, with a small coral island beyond, covered in vegetation.  I was going to be the good surveyor and make sure I walked the entire coastline, so I decided to wade through the channel.  I took off my shoes and socks and placed them in my bag, then I carefully unzipped my trousers.  Let me explain.  I was wearing long field trousers, partly since I knew with the meeting we had to be semi-formally dressed.  But they had zips just above the knees where I could take off the lower legs and convert them to shorts.  I placed these leg-ins in my bag then took my wallet, handkerchief, hotel room key and placed them deep in my knapsack.  I patted these top pockets to make sure they were empty, then zipped up my bag and placed it high on my back.  With GPS in hand I wandered round the mangrove, leaving my colleagues and the village heads walking round the back.

At first the water was shallow, but my feet sank slightly into the soft sand.  But then as I came around into the channel itself the water level hit my knees.  I realised that there was deeper to come and even my shorts would get wet, but hey ho, this is a warm climate – they will soon dry.

So I took one more step and sank up to the top of my thighs.  I tried to keep my bag, notepad and GPS high above the water and was realising there was little to note here that I would not have seen from the bank, when I realised my left thigh was vibrating vigorously.  I knew immediately what was causing it and I ran to the bank.  I say ran, what it was really was a violent wade.  Once out I dumped my bag on the dry sand and dug into the leg pocket of my shorts, retrieving a very wet looking mobile phone.  It was still vibrating and making pitiful noises at me.  I flipped it open and water trapped inside flushed out.  The screen flashed a couple of times then went dark.  I tried to turn it off but the vibrating went on.  It was like watching the death throes of a small mammal.   In a last ditch attempt to save it I ripped the back cover off and took out the battery.  The vibration stopped.  I reached into my bag for my handkerchief and wiped the battery down, then dabbed inside the phone casement and all round the screen and buttons.  Maybe it was just the contacts that had got wet and now it would be OK.  I gingerly put the battery back in and closed up the cover.  With a deep breath I depressed the on button.  Two seconds later the horrible vibration started over again.  Then it stopped.  Silence.  My phone was dead.

On the beach – the phone died round the next corner….

Kew had their own GIS section (whose members were also keen to travel to these amazing islands) so I never got a huge amount of work from these visits, but given I had helped Stedson over the years with his logging of plants, I was asked to come back to Ascension  on my own purely to look at the plant issues.   Phil had been pulled in to help Andrew with the detailed surveys.  They carved up both St Helena and Ascension Island into square blocks, and then did a comprehensive species list, not just looking for endemics but also natives and invasives, every type of high plant.  They also had to judge the abundance of each species.  I travelled out just for a week to help out on all the plant issues, and Andrew and Phil were beavering away with their surveys while I was there.  They absolutely loved it although the field work was exhausting.  They would spend several hours a day out surveying a square, not so bad if it were close to a road, but involving a long trek if it was not.  Up on Green Mountain where the vegetation was much thicker, they had subdivided the squares, and exploring each study area was made much more difficult by the steepness of slopes, wet slimy ground, and thick undergrowth to get through.  But they were out in the fresh air, doing what they loved.  And they had taken residence up at one of the cottages on Green Mountain, and they cherished the seclusion and at-oneness with nature that they got from there. 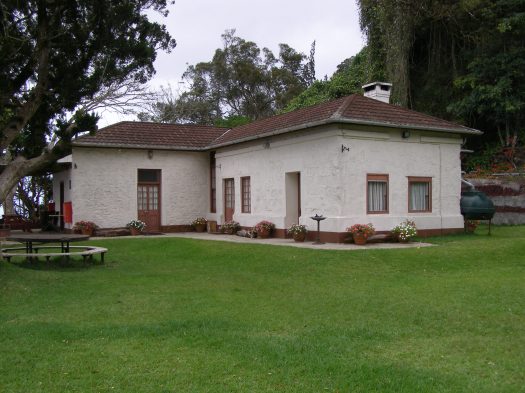 I joined them once for one of their easier days.  They had not completed much of the north east of the island.  I had never visited this quadrant before.  Much of it is covered by a firing range still used to this day by the military and you have to check in with them to make sure it is safe to enter, and just be careful not to tread on any stray ordinance which has been left behind.  We accessed the range by driving down the road at the back of Two Boats towards NE Bay.

Close to the flagpoles which would carry the warning flags if firing was scheduled, we gathered our kit up from the back of the Land Rover and started to tromp in.  The grid square was pretty much on the road and in its centre was a low lying area surrounded by conical hills of various sizes.  The western side was connected to an area which has seen the most recent volcanic activity, less than 700 years back.  These cones, in geological terms, are fresh, and full of loosely consolidated pieces of ash and small nuggets of lava. Their conical shape is so uniform as the material sorts itself to the maximum angle that the gravel can stay together, any steeper and pieces naturally roll down till equilibrium is re-established.  One of the craters, though, has been subjected to other factors and one side of the slope has collapsed.  It has been given the name Broken Tooth given the sharp jagged edges where the collapse took place.  In between the cones are the a series of lava flows, but they are not as black and angular (or difficult to traverse) as the ones around the coast or on the large north western coastal plain.  Wash from Green Mountain behind has filled up some of the gaps with a yellowish sandy soil, which is  more easy to walk through, but there are still lots of loose stones and hard angular rocks to be careful of when you hike.

I was surprised just how much vegetation was in the grid square.  Again, probably because of Green Mountain behind, seeds have been carried down in the sediment and given the landscape a much richer flora than similar geological areas further away from the mountain.  There were plenty of Mexican Thorn here but it was not dominant.  Casuarina trees were prevalent and seemed adept at gaining a foothold on the scoria cones.  Trees were one thing, but the whole area was carpeted in herbaceous and annual plants, so many little flowers and seeds, once gaining a foothold in the rubble, forever more established.  Andrew and Phil recorded each species and where necessary, guessed the abundance.  There were still not that many species; maybe twenty frequently occurring and a few other specials.  They both rolled their eyes when they remembered the long lists they had to compile up in the mountain tops.

In the Broken Tooth Range

Thorn trees in Broken Tooth with the Scoria Cones behind

It was a real pleasure to explore this part of the island with them, but unbeknownst to me , things were going wrong underfoot.  I had been wearing my heavy duty boots, with steel caps and base plates.  They were great clunking things but surprisingly comfortable from the inside.  The terrain in Ascension is unforgiving though, and although Broken Tooth was mild in comparison with the big lava flows, I managed to rip the sole from the upper.  The front became completely detached, and I gingerly flopped back to the Land Rover.  I asked around if anyone had any strong glue.  Some of the Conservation staff sucked through their teeth, but Stedson came up trumps with Araldite.  I pasted the gloopy mix and put it in a vice in his workshop.  Ten minutes later I had a single shoe again, and continue to wear it to this day.