The walking party made their base camp on a grey shingle beach at the back of the ponds and we ate our much needed packed lunches.  Then those who wanted to sun bathe settled back.  I did several forays over the rocks and took a look in the pools, but I had brought my snorkelling gear all the way from the UK and in six weeks on Ascension Island and St Helena I had not used it once, so I put on a spare t shirt, stripped down to my bathing shorts, plonked on the mask and snorkel and waded in my coral shoes into the deepest pool.  If was freezing!  But in front of twenty people I was not going to chicken out so I plunged into the water.  I was glad I did, as to be able to watch the zebra fish, the anemones and shrimps at eye level was enchanting.  But my body could only survive a couple of minutes at this temperature, so I came spluttering out to vigorously towel myself down and absorb as much heat from the sun that I could.  The contrast between the calm water in the pools and the raging Atlantic Ocean beyond the rocks was startling.  Lot’s Wife Ponds were renowned as one of the few places you could swim in St Helena, the others being a small area under the cliffs off the wharf in Jamestown, and Jamestown Swimming Pool itself next to the castle.  Almost anywhere else you ran the risk of being swept out to sea by a single wave, and with no lifeguards or easy access to boats, there would be little chance of being saved. 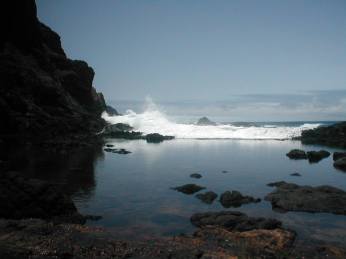 The ocean rolls over the edge at the top

The swell moves down through several ponds 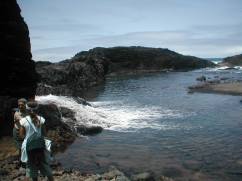 The water escapes at the lower end of the ponds 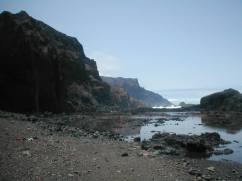 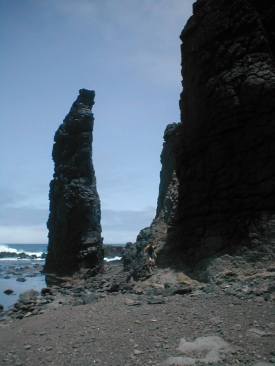 Hidden away below the mountains

And the ponds are crystal clear, full of life, and freezing cold!

When the weather turns wilder the sea breaks into the ponds

Above all the characteristics of the Saints which I had come to love over time, it was this ease with which they lived on this tiny rock in the middle of the ocean.  I did see frustrations; I knew some Saints who had left because they could not cope with this claustrophobia, but to see how homely, relaxed and friendly almost the whole population were, while they lived so close to some very dangerous sea, cliffs, mountains, was humbling.