That buzz never matched the first time I was due to travel on the ship.  Edsel and I had worked for Conservation for about three weeks and I had seen him off at the airhead a few days before to return to Nashville.  I alone had been invited to go on to St Helena.  To fill in the time,  I’d been out surveying with the Conservation guys, including falling over on the hard volcanic rocks and damaging my ribs.  I spent a restless last night on Ascension, in pain from my ribs, but also full of expectation of going on a new form of transport for me to a location that is so exotic even I could not fail to be impressed.

I’ve been on the water a few times of course.  The Mersey Ferries were a  treat from when I was a kid.  The ferries to Scottish Isles and the Isle of Wight, a canoe here or there, a river trip up the Norfolk Broads,  and hopping around the BVI archipelago for work and pleasure.  And I’d had a windsurfing lesson in BVI.  Not really a list that could make me a master mariner.

Contemplating the three days ahead I realised in all my forays onto the water I had never been out of sight of land before.  This would put right to that  – once away from Ascension Island I would see no land till we approached St Helena, some 750 miles to the south east.

I’d collected the all important tickets from the Dock Office near the pier head in Ascension.  It was a fascinating little envelope with a letter proving I was allowed on board, some instructions for how I should get ready for boarding, a couple of tags – “Hold” and “Cabin” – for my luggage.  I said goodbye to many of the staff down at Conservation, checked out of the Obsidian, and Tara loaded up my bags in the Land Rover for the short drive down to the Pier Head.  We parked up on the large car park below the huge stone store house.  When the RMS arrives, the Pier Head itself is closed off and I had to head to a shed to have my bags x-rayed and checked in.  Despite this being one of the remotest islands in the world and with its two military bases, the shadow of September 11th still hung over all travel. 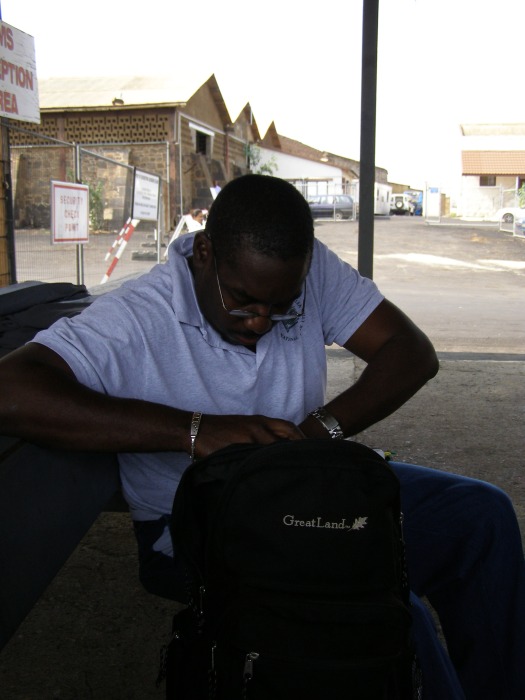 Edsel in the waiting pen on the second trip over

I then had to wait.  I went over to the open shed on the left of the pier head and settled down on one of the benches along with a number of other Saints and visitors.  Some people I had been working with on Ascension Island; they were travelling home to St Helena to see their families.  Others I may have seen the last couple of days since the last southbound flight had come through and they had been billeted at the Obsidian in transit.