EROS Data centre is the location of possibly the largest archive of satellite imagery in the world.  It was built in the early 1970s when satellite imagery was starting to be collected routinely at the global scale, and one of the USA’s most ubiquitous sources of satellite imagery had been Landsat.  I had used it ever since I learnt how to be a remote sensor in the early 1990s.  They chose Sioux Falls because they wanted a location which was relatively central to the North American continent to capture the data and download it as the satellites passed overhead.  Not only did they download the imagery, but they archived it, and copied it for others to use.  I remember waiting weeks for data to arrive on large spools, then tape cassettes, then CDs and DVDs.  Now mostly it can be downloaded from the internet.

The storage of all those data was a massive challenge to EROS – especially since those satellites kept on just collecting day and night (even at night you could obtain radar and thermal images).  Underneath the building a basement capable of resisting a nuclear explosion was created and Gray took me down there as part of my tour.  Big parts of it were now empty, but at one time, Gray said, he could remember when every inch was covered in shelf after shelf of cassettes or spools.  Now, he joked, we might as well set up some bowling alleys down here.   Later he took me upstairs and  looked through bullet proof glass at a large room which contained just two large supercomputers. They now contained many times more data than the large basement had ever held in the 1990s.

Back down in the basement, though, was a fascinating archive of the oldest imagery.  There were plastic and metal canisters that contained original film from the early satellites, including from US surveillance forays of Russia and China with the Corona satellite.  The images were parachuted back to earth on film negatives.  Along another row we came across envelopes of the original Landsat MSS imagery again with negatives in.  Gray knew his way around many of these shelves, he was an old remote sensing hand and had spent many an hour searching for imagery he wanted along the aisles.  But when I looked up and down the shelves I saw they disappeared several hundred feet off into the gloom.  Even now, the physical archive was enormous, and the USGS had not got around to digitizing the whole lot.

Archive stretching into the distance

And yet, I went to one place in the States where I came to the conclusion its residents really did have no need to travel further.  At one time they had struggled to make their landscape inhabitable and productive, and now they had got it just right there was no need to go spoiling the balance.  Once home there you would be happy.

The location of this Shangri-La may surprise you.  It is South Dakota.

I never dreamed I would go to South Dakota, but the opportunity arose out of the work I had been conducting in, of all places, Sierra Leone.  I’d worked with the US Forest Service out there who were interested in measuring the impact of my project in terms of the land use changes over a period of time since the project had started.  The whole point of the project was to protect the forest there that was being decimated by logging, charcoal burning, shifting cultivation and climate change.  They wanted me to map various parts of the region to see the different effects, look for trends and see whether protection had improved the forest, or at least decreased the rate of decline.  To do this I was to use similar techniques similar to a great colleague of mine who had also worked with me out in West Africa, Gray Tappan.

Gray, and his colleague Matt Cushing worked for the US Geological Survey, one of those huge federal monoliths that even to many laymen in the US would be a household names.  They made so may maps people used, recorded earthquakes, mapped the vegetation, rivers, geology, climate and all sorts.  I knew of them from the time I started as a geographer at Durham University at the age of 18, and when I was working for NRI and started using satellite imagery, I found myself ordering data from the USGS Center for Earth Resources Observation and Science, or the EROS Data Center, in Sioux Falls.  Now I was being asked to go there to learn Gray’s techniques and start my work on Sierra Leone in their offices.  As a geographical geek it was like going to the Vatican, the Taj Mahal, the Forbidden Palace.  This was my Mecca.

After what seemed like an age and with the adrenalin still pumping hard around our bodies, we saw a fence.  We worked our way back towards the track and saw an open gate.  It was a bit of an anticlimax – I was thinking we would be scaling walls or cutting our way out, but here was an open gate.

We were still nervous that we were in the wrong place, but to have put some distance from the houses helped.  It was still concerning that we did not really know what was ahead, and there was the horrible chance we might have to double back and face this area again.  Although I was carrying print outs of the satellite image, I had worked them to show the features in the sea strongly, and the shapes on the landward side were all dark and low contrast.  I had never picked out all these amazing features beforehand; my assumptions were that we were going to be in just wildwood.

East of the menagerie of animals, the ornamental ponds and the perfect little holiday houses, the land returned to a more open parkland, still well kept, but more natural.  There were a couple of interesting hilltop ponds capturing the freshwater from the cane fields above before allowing it to trickle over into the sea.  The cliffs were higher again, but the vegetation much more tangled than earlier on.  Then we hit yet another large gorge.  This time we were determined to cross it close to the beach; time was going on and we had some distance to cover yet and few options for short cutting inland back to the main road.  We found it easier than we had expected; there were a couple of trails where animals had zigzagged down the side, and we found the stream shallow and covered in rocks rather than mud, so fording was an easy task.  We were then able to scramble up the other side and regain our track – a fifteen minute crossing instead of an hour’s diversion.  This was very useful as both our energy levels were sapping and our feet were very sore. 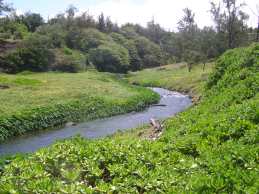 Worth wading this one to save time 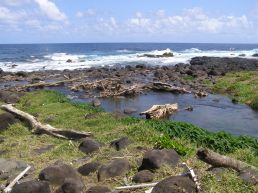 Glad to have this stream behind us