Not every loud sound in Kingstown was so welcome.  One reason I never picked a house in Road Town when I moved to the Virgin Islands was the thought of having a  neighbour with a boom box.  In the tropical warmth, windows have to be open most of the year but that means you cannot shut out the noise.  Now don’t get me wrong, it is OK to hear people chatting, children playing, the odd dog barking or a few minutes of DIY here or there, but when people play their music at full on volume so that not just the immediate neighbours can hear but most of the valley you live in, for hours at a time; I would go crazy.  As well as that, other noises can be off putting.  I once stayed on a small farm in St Lucia for a night.  The house was a large villa style, and I could put up with the smell of the pigs and the stew of supermarket leftovers they were fed on.  But the large chicken coop near the room I was sleeping in was the limit.  All through the night, the cockerels would call at each other, and responses would come from the whole neighbourhood.  It would build up over a few minutes; one would cock-a-doodle-do into the empty skies.  There would be a gap of a second and another would retaliate.  This would set off two or three others close by which would then trigger calls across the neighbourhood.  The initial caller would then try and call even louder – the strain on his voice apparent from the strangled “Doodle” part of the call.  This set off another round.  If I were lucky there would be a minute’s break, still not quiet as the clucking of the hens was constantly audible.  But the respite would be short lived; just as my eyelids had become heavy and the drowsiness was returning one or other of the feuding cockerels would set off another round of crowing. 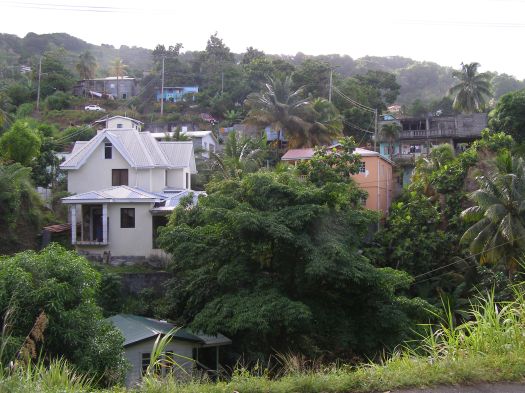 The view left of Eduardo’s

In Kingstown the cockerels were scattered around the valley and not just outside the bedroom window so they quickly became background noise.  But one noise I could not avoid came from the road below the apartment.  Every day, and for an extended period on Sunday, I would hear the click of a loudspeaker come on and an old man’s voice lyrically telling me about the good word of God, how He would save our souls, and how He would punish sinners.  If he just said that I might have been happy for him to have free speech, but instead of those pithy three statements he would drone on and on and on and on down the microphone, rambling about how he was feeling that morning, quoting lengthy passages from every book of the bible, relating it to some story or parable or quote he must have picked up on one of the religious TV channels that day.  I’m reporting this as if I listened carefully to what he said, but it was only because I got this most days for two weeks, and it was all in a similar vein that I managed to string it together into something which now sounds moderately coherent.  The reality was a loud but still just an irritating background noise, punctuated with the odd Hallelujah or Amen.

At first I thought it was a church that I could hear, But Eduardo, now the local, had talked to his neighbours and found out it was just an old guy living alone who set up the tannoy at his lounge window and blasted the neighbourhood with these sacred ramblings.  At least he was a way down the valley and he had the good sense to give up by 10pm; maybe due to past experience of a neighbour threatening to brain him if he did not shut up.