Our second day of field trips was to look at two more of our possible case studies.  The first was probably the most important one from the point of view of the EU Funding.  To the north east of Kingstown is a large catchment called the Mesopotamia valley, and it is stacked full of banana trees – the largest plantations in the whole country.  As I’ve explained the industry is declining and some of the hillsides are being abandoned.  While the natural vegetation is encroaching on some fields, the steeper slopes are becoming more susceptible to erosion and the consequences for flooding in the settled valley bottoms and dumping soil out over the coral reefs on the Atlantic Coast. 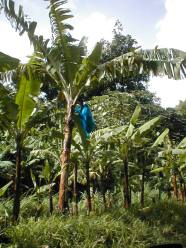 We gathered at the ministry to take a vehicle out of town towards the airport.  Just beyond the turn off to the terminal, right at the end of the runway, we veered off the Windward Highway and started heading up through the leafier suburbs behind Arnos Vale and over the ridge into Mesopotamia itself.  The road hairpins down the side of the valley, but not before you have several look out points to see the expanse of the plantations.  It was rainy season and the central mountains of St Vincent looked threatening in amongst the iron grey skies.  Houses were generally nestled at the base of the valleys, or along the many ridges that reach down from the volcanic peaks.  The steep slopes in between were full of banana plants, many of them with their fruit covered in blue plastic bags to protect them from insects and fungus.

The evidence of banana industry was everywhere – not just in the fields.  Along the roadside we would see pallets ready for stacking the produce; in the heart of the valley was a large metal storehouse that was marked as a processing plant.  A whole posse of trucks sat in yards here and there waiting for the time they were to transport the cargo down to Kingstown wharf.  It all looked very organised, productive and profitable.  But then we saw the abandoned plantations and the derelict machines and you realised this was the last vestiges of a declining industry.

The options for land use change in St Vincent were limited.  Beyond the abandonment of fields and recapture by the natural vegetation, they could be taken on for other sorts of agriculture.  This was somewhat limited by the steepness of the slopes on which the bananas had been grown.  One potential application of the National GIS was to study the slopes, the soils and the water sources to look at land capability for other crops; be they ground annual crops like rice or wheat, or plantations such as rubber, arrowroot.  The latter was a traditional crop in the north of St Vincent that had gone into decline until it was seen as a very useful whitener or computer paper.  The other alternative was to subdivide the plantations and allow further building development.  And that was about all.  The steep slopes of Mesopotamia were a large problem for government right now. 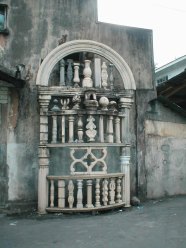 We followed the main river out of the valley and down to the Windward coast.  Here the land was flatter and often used for coconut plantation as well as other farming – the options of non-banana land were much wider than that in the valley.  But this area was earmarked for a much bigger project.  Ever since I had started coming to St Vincent there had been talk of a new airport.  Still no turf had been cut, no sod lifted.  But this windward region was in such limbo that it too looked slightly decayed and worn out.  With the prospect of hectares of land being bought up for runway, taxiways, tarmac, terminal buildings and car parks, nobody was investing in their private dwellings – just waiting for the government to pay them off so they could move on.