And so to work.  Another busy morning started with a meeting in the STEWARD office just opposite the guest house.  Then we travelled a few kilometres up to a new school.  A large number of guests had been invited in to get the formalities achieved as efficiently as possible.  This included chiefs, politicians, representatives from various farmers organisations and a few others.  In many senses this trip was a launch in the field of the third phase of STEWARD’s work in the region and it was vital to sensitise and observe due respect for the key decision makers in the region.  Without their support nothing was going to happen.

Across the large trial plots

Well in the centre of the plot

Everyone introduced themselves and I surprised a few of my colleagues that I could muster enough French to apologise to them how bad my French was and that I was ” géographe qui travaille avec le teledetection et les Systems Information Geographique” .  Slightly sweating I sat down again and hoped no one would ask me to speak again.

The next part of the morning was spent at one of STEWARD’s activities from past phases; a large development plot on a hillside outside Madina Oula.  Several hectares had been hedged in and different organisations were working on improving the ground and making demonstration sites to teach farmers new techniques.  There was plenty of scrubby space up here for expansion, but there was still a lot going on, as we were treated to orchards, beehives, fruit shrubs, tree nursery,  bananas, crops, and goats, pigs and cattle.  At each part of the compound we met up with various collectives, including a very enterprising women’s group that was developing their own ventures up here.  We inspected their plots, the wells, the trees and animals, even the compost heaps.  I absorbed it all; I am fascinated when people want to impart their specialisms on you, and whatever I could retain could be useful for Kofi and my work when we returned to Freetown; helping people map the activities out here, and do spatial analysis and comparisons with other data.

As we were making to leave, a middle aged farmer in navy blue overalls who had been following us around the plot invited us to cross the road to his own fields. He took a lot of pride in showing what amounted to a miniature version of the official demonstration plots.  He had a set of small trees in plastic packaging ready to be planted out; he was multicropping to reduce pests and diseases, he composted and manured, he had a kind of drip irrigation system.  This was extension in practice and it might only be a little win for STEWARD, but it was encouraging to see it happening.

I felt I needed some local currency, and Stephanie needed to exchange some project money, so we walked back in to the market.  Guinea exchange rates and note sizes are worse than in Sierra Leone, so Stephanie ended up with a couple of black bags.  I changed only 20 dollars but still managed to come out with a pile of notes.

It was late afternoon and the stallholders were starting to clear their spaces, pack  up what they could take home and leave the rest for the vultures.  We headed back to the main guesthouse and ate a pile of rice and chicken, during which Haba turned up with our passports all stamped.  After dinner the guys decided they needed a beer and someone who had been in town before took us along a road to the edge of town.  We entered a compound surrounded by a large white wall.  On one side of the car park was a chunky single storey edifice with no windows; Madina Oula’s sole nightclub.  On the other side was a more pleasing looking building with thatched roof.  This was just a bar and we piled in there.

The STEWARD office in Madina Oula

We were the only customers, a single barwoman was fiddling with items on the counter.  The bar having electricity, Guinean TV was playing from a set hanging from a wall, and a Coca Cola Fridge was humming behind the bar.  We took a couple of beers here but there was no atmosphere.  Of course we had walked in about 7.30 pm and the nightclub didn’t get started till midnight.  But the owner did come in and have a chat with us; I found out later he was quite a bigwig in the area.  We did not stay long; we had an early start tomorrow, and Matt, Kofi and I had to return to Sierra Leone, overnighting in Fintonia before heading back to Freetown the next day.

Matt, James and I sauntered back to our guesthouse.  There was little point in staying up as there was no light and we were all bushed.  I settled under my mosquito net and read for a while but I was very soon asleep.  I did wake up in the night to get rid of some of the beer, and I did awake a couple of times when people passing by my window were chatting or I heard the scuffling of rats on the roof, or bats coming in and out of their roosts under the eaves, but otherwise is was a restful night… just.

We piled back one more time into the vehicles and expected another long bumpy ride, but instead we headed about 100m into the central square of the town, turned right up a narrow street between several houses, right again and came to a stop under a large tree.  To the right was a well built house with new aluminium roof.  We piled out but Stephanie warned us not to unpack the luggage just yet.  There were still about a dozen of us in the party, plus the drivers and we could not all fit in the guesthouse.  The four women would stay here.  The men would be dotted around a number of houses in the town.  With a little trepidation as to what the accommodation was to be, myself, Matt and one of the Freetown STEWARD staff, James, headed off with one of the local STEWARD staff who had come out to greet us.  We walked past a small mosque, down a couple of footpaths in between various houses and came across a solid building with wooden shutters across the windows.  The main entrance was hidden away in a small courtyard shared with several other houses but there was another door out the back.  The building had four small bedrooms off a main room, but the furniture was austere.  In the main room there was a small wooden table with one chair, and there was a low flat bed and chair in each of the other rooms.  The only other objects were a set of plastic buckets and water containers, all empty at present.  There was no kitchen, and we were shown a communal lavatory, basically a hole in the ground in a fly ridden shelter outside, and the bathroom.  This was a gravelly space enclosed on four sides by grass fence but no roof.  Well, we were only here one night; we could make the best of it.  However we thought it was a concern that none of the doors had locks on them so we talked to the local STEWARD guy and while he searched for a handy man, we took a turn around town.

Our base for the night

Bed for a night

For as we all piled back into the vehicles and the cavalcade headed off down the track round the corner I had been observing, I realised there was no border post on the Guinean side.  Indeed we then proceeded to drive for a further 40 minutes.  We were not at a border, we were at a frontier. I’d had the feeling ever since we crossed the Scarcies River on the ferry that I was detached from the rest of Sierra Leone, but now I realised we were heading through a gently changing continuum from one country to another.

The landscape continued to open up and there were far more areas of just grass. Northern Sierra Leone does not have cattle, they tend goats and maybe a few sheep and pigs, but no cows.  Here I saw my first herd as we drove through this no-man’s land.  Indeed this was no empty space between the two countries; there were people on bikes, herdsmen with their cattle, women and children carrying wood on their heads, and even the odd collection of inhabited huts. 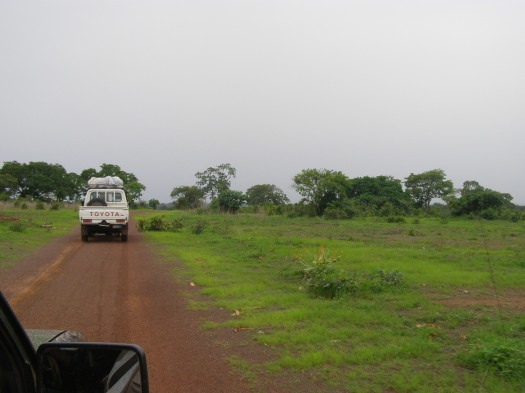 The weather had closed in again as we crossed a large bas fond, heavily grazed down to the roots, and our way ahead was barred by a barbed wire fence.  Near our track was a camouflaged watchtower.  Aimed at our vehicles was a machine gun, although since it was rusting out in the rain I doubt it would have done us much damage.  There was the usual style of chain check point, but it did not go down immediately.  Haba chatted to the three guys in their fatigues, showed the vehicle laissiez passer and I fully expected we would be next to be inspected.  But instead the chain went down and we passed through.  This was merely the military border.  In fact our driver explained that technically we were still in Sierra Leone.  We had not left yet.  The border was ahead of us running through the southern part of the town of Madina Oula to which we were now gently descending.  We passed a series of fields, then huts, then more substantial houses and were finally coming into the market of Madina Oula when I spotted the actual barrier that marked the border between Sierra Leone and Guinea.  Right outside the police station in the centre of town.  And when I looked at my GIS maps of the area, although there was some confusion as to where the exact border was all round here, several of the lines converged on this point.

With the market still in full swing around us, Haba once more went through the process of getting his laissiez passers inspected and stamped, and all our passports were taken in a bundle into the dark recesses of the station.  Stephanie accompanied Haba and came out with a tired smile on her face to tell us we could go ahead to the STEWARD guesthouse and they would pick up the passports later.