Michel manages all three sites, and gave me the tour of the Briar’s.  The single room in the pavilion had been lovingly restored as it was believed to have been during Napoleon’s occupancy.  Tasteful Georgian furniture offsets the dark green wallpaper.  Various bits of memorabilia about Napoleon are on display, including a substantial bust, which I imagine would never had been allowed during his incarceration.  I chatted to Michel for a while, but once I had looked around the room there was not much else to do at this location, and I could see he was doing this as a favour to the National Trust so I did not burden him too far.  I drove up Side Path, through Alarm Forest and headed out to the eastern end of St Helena.  Just at a gateway that heads off to the village of Longwood, I turned off and up a gravel track I parked up in front of a low but substantial building. 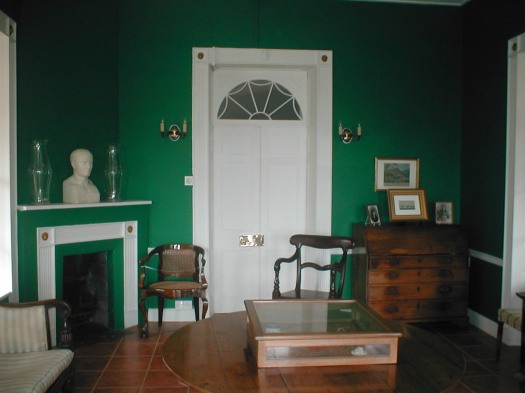 The interior of the Briar’s pavilion

Longwood House was kitted out and made secure for the long term location for Napoleon.  Opinions vary as to what was the purpose of putting him over there. It was quite a way from the sea, so any attempt at a rescue would still have to battle up to the location; its exposed spot away from forests was seen as easier to secure than other houses.  Maybe it was the only sensible place available.  But I am sure there was a part that was ensuring he would be as miserable as possible.  While the residents of Longwood will defend the location, many visitors find this the most inhospitable lived in part of St Helena.  Longwood House sat on an exposed ridge, the south east trade winds blew straight in there bringing the soggiest coolest air and plenty of rain.  Napoleon reported that the house was cold and damp.  Even though it has been restored and turned in to a museum, it still had an unwelcoming air.  The furniture put into the restored house is the same tasteful Georgian style as in the Briars but here it looked uncomfortable and wrong.  On the tour you pass through various rooms, the billiard room, the drawing room where Napoleon would receive visitors, the private rooms where he tried to sleep, and, his favourite, the bathroom.  Over the six years Napoleon lived there, the visitors gradually dropped away and he became a recluse.  The house itself did not appeal to him, and his only solace was in designing and creating a garden in the grounds.  Much of his design has now been recreated and, being within walls, it is a leafy oasis on the barren ridge.

Still difficult to keep the weather out

Longwood House from the garden

The garden that Napoleon had a hand in