Nevertheless, it was with renewed excitement that I woke up the next day.  We made an early start for the Kuru Hills.  Gray was out here mapping the vegetation for the whole of West Africa.  He was trying to teach various agencies in each of the country’s his techniques but still him and his colleagues had to do the bulk of the work.  I admired his techniques of interpreting the landscape and mapping the different types of vegetation and land use on the surface, and I wanted to see how he did his field work, keen to pick up some tips.

One of the national park rangers from the Kilimi-Outamba Park joined us in Fintonia and we travelled north from the village , past Sumata where we had been stranded by the fallen tree the previous year.   The road was permanently diverted round the remains of our tree and the tree itself was now overgrown.  We passed a couple of hamlets and the village of Yana, then Gray and the driver started talking about where the turn off  was.  He spotted it no problem – Gray is a supreme geographer therefore an obvious navigator.  It was only 7km to the foot of the Kuru Hills but the track was narrow and potholed and it wound up and down and round and round to take the easiest route through the knobbly terrain.  Gray was already working as we went along.  He had spotted a series of strips of vegetation that looked more uniform than most of the forest and they appeared to be along this route we were taking now.  We looked around to spot we were traversing along a narrow strip of rubber trees.  To our left the natural forest could be seen starting again only about 30m away, and about the same distance to the right we could see scrub and a view out over the plain below these foothills of the Kuru range.  It seemed that the track we were on would have been to service these trees and ship the timber back to the coast.  The villages we passed through close to the end of our journey had most probably sprung up because of the road, not vice versa.

One evening we had finished early enough I decided I needed some exercise.  I had been trooping around with the trainees but the walks were short and there was a lot of time just standing round explaining or fixing problems or interviewing the land holders.  I felt the effects of too many chicken and rice curries and felt I needed to reduce the bloat.  So I told Kofi I would head along the main road and see where it took me.

The sun was just beginning to drop low enough to redden the sky; I estimated I had about 90 minutes before it got too dark to see.  I dropped down from the house and within 100m was in amongst the community forest which bounded much of the village.  At the bottom of the hill was the women’s bathing pool and a couple of semi naked women were washing and chatting down there, their children playing in and out of the water half covered in soap.  The road rose quite steeply into the dry scrubby vegetation; I left what was called the “gallery forest”, the tall thick tropical trees, behind, and entered a low but densely treed area with thick tangles of grasses and creepers now almost completely dried out. To me it was a very pretty landscape, a sort of crowded parkland; one I heard was innately within our blood to connect with as it was the savannah landscape our first ancestors ever looked out on.  The road dipped again and there was a wide valley bottom.  As opposed to the community forest, this valley had been stripped of all but a few trees, and the floor carved up into different farm plots.  A variety of food was being grown here; as well as rice paddies there were vegetables including onions, chilli, okra, gourds.  People had devised different ways to control the water flow and water logging here; some of the crops were grown on small round soil mounds about a metre above the valley bottom, others in ridges of soil.  In other places bunds had been put up to shelter the crop from the little channels of water than ran between each plot.  It was so carefully controlled, meticulously managed.

And the contrast between the green of these bottom areas (bas fond in the French was a common term used for them) and the dry scrubland vegetation around was stark.  No wonder you could pick it out from satellite imagery so easily. 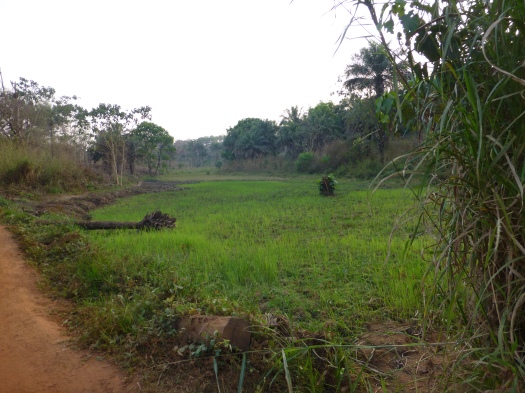 Bas fonds far from the village

I say that these parts of Lesotho and South Africa are the same terrain, but it was incredible how different the landscape looked once we crossed over.  In Lesotho every piece of flat land appears cultivated – lots of narrow field strips allow subsistence or low income farming to go ahead – mostly hand ploughed, hand sowed, hand weeded and hand harvested. The farmsteads all intermingled with the crops and the livestock roaming everywhere.  And the soil was so dusty at this bum end of the dry season.

Spot the border – South Africa on the right, Lesotho on the left

In South Africa, there were hardly any villages, just miles of rolling grassland, some of it fenced in for cattle, some being prepared by machinery for the next season’s crops.  There would be a ranch or a farmstead of immense proportions and loads of outbuildings for their kit and storage.  Hidden away often amongst a grove of trees, you might get a glimpse of the African style houses of the farm labourers and their families, but they were not allowed to be cultivating their own crops or hold a lot of livestock.  Maybe the odd chicken.

The sparsely populated, big fields of the South African side of the border

Here we were in Free State, the big wide open spaces, one of the breadbaskets of Africa, such a low population density compare to Lesotho.  This was scenery on a gigantic scale.  Each time we would pass through a gap between the mountains and a new valley would open up for miles around us it would take your breath away.  We skirted a low lying area called the Brandwater Basin and every time we reached a ridge a new vista would open up.   We travelled for another hour or so before we dropped down into the eastern extremity of the basin  to find the small town of Clarens nestling in amongst all the hills.

We were there first time in the winter, as the temperature differences we were experience might have hinted at.  Spring was in the air though, and I saw trees with a delicate pink blossom in so many back gardens and fringing fields.  I was told they were the peach blossom, a delicacy in Lesotho.  They decorated what was otherwise a dull brown landscape, the bare fields had no crops in, the rocks were clear of any moss, and the dirt roads were the same colour as the soil.  We were grateful for any colour we could see.

The road to Roma

A hint of higher ground in the distance

Hamlets brighten a grey landscape – especially if they have peach trees

A peach tree yet to blossom

That is not to say how gorgeous the scenery looked on this bright sunny cold morning, with the blue sky as a backdrop to contrast against the land…. it was just a little monotone. Roma itself nestles at the foot of the first serious step up of altitude, so the backdrop to the city is a stunning set of escarpments and the odd stand alone mountain.  Immediately striking of these were how similar they were to the Basotho hat building and headgear that were a symbol of the country.  A plug of hard square rock atop, a uniform scree all round that formed the cone.

Mainly students going to and from class 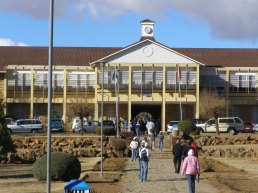 Southern Africa is the place in Africa where you see the locals all covered in clothes – wrapped up in balaclavas, scarves, sheepskin coats, moon boots, and the cold of a Lesotho winter made everyone put on everything they owned and head for the nearest fire.  At this elevation, it took people much longer to warm up than in Maseru.  I wondered how they coped up in the true highlands.  Even when we reached the university we found the lecturer we had come to meet huddled around a three bar electric fire.