We passed on south through a couple more villages.  Many of the settlements on the peninsula had curiously colonial hark back names.  They would have been predominantly Krio cultures, the people descendants of the freed slaves.  They had brought back place names from their colonial masters like York, Sussex, Aberdeen, Lumley, Waterloo, Hastings and , at the end of the peninsula, Kent.

It was to Kent we made our way.  We again dropped off the main highway where it started to turn to the east but this time the village was a few kilometres away and we had to go through Bureh Town and past another gorgeous beach to reach the very tip of the peninsula.  The main residential area of Kent was along a few streets at the east end of the village but the centre and focus for activity was right at the end of the road near where the coast turns right angles.  We were charged for parking – the villagers here obviously a bit more savvy about tourist trade than others.  And as soon as we started to explore we were accosted by various people. They were all friendly and wanted to show us their village which they believed to be the most important part of Sierra Leone. 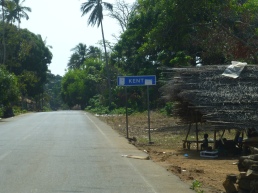 We made our own way down to the beach at the Freetown end of the village.  The sand was golden here and we got a good sweep back up to the mountains.  Steering clear of the people playing ball games on the beach, we clambered around the rocky coastline and I came across a wonderful little harbour.  The rocks opened up at one point and sheltered a long narrow deep cove filled with sizeable fishing boats.  I stared out to sea.  I was on a corner of Africa here, a place where the west coast of Africa turns into the Gulf Of Guinea.  To the south of me was nothing but ocean for thousands of miles to Antarctica.  Except of course that about a thousand miles south of here was Ascension Island.  Sometimes I am amazed at how interconnected my travels become even though the routes to get to them are contorted by time and logistics.

Jan had no fear and also a much stronger 4WD Toyota Land Cruiser.  He had been running around the back streets of Freetown looking out for historical artefacts.  Freetown was at the head of a peninsula that always feels separated from the rest of Sierra Leone.  It was the gateway to a large part of west Africa, having the best deep water harbour along a stretch of the Atlantic Coast from Nigeria to Morocco.  The original inhabitants of the peninsula were the Koya Temne and the Krio that now dominated culture and ethnicity there were descendants of freed slaves that had been given the land “forever” by the local tribes.  Hence the name Freetown.  The British could not keep their hands off the region though and used Freetown as a base for their trading.  The usual trappings of colonialization were set up; not just the old warehouses and substantial merchants buildings in the centre of the old city, but fortifications on the many hillsides to protect this fortuitous location.

Jan had scoured old documents and maps and found that several of the cannons still existed across the city and had spent some weekends looking for them.  He had also visited the oldest school in west Africa, and gone searching for other historical colonial artefacts.

Jan and I made a couple of other excursions down the peninsula.  One day we drove down to the point where Kofi had turned back and Jan gingerly dropped down this potholed but once tarmacced road.  The road, flanked by thick vegetation turned to the right onto a badly maintained concrete bridge across a river.  The potholed highway continued up the other valleyside and then … bump bump…  you were up onto a smooth well maintained bit of metalling.  Kofi and I had turned back less than half a kilometre from where the good road started.  The chaos of the road out of Freetown was all down to the construction from the Chinese who decided to tear up the whole countryside one time before laying a road, as opposed to progressively rolling out a finished product.  To the north of us was thirty miles of dust and mud. 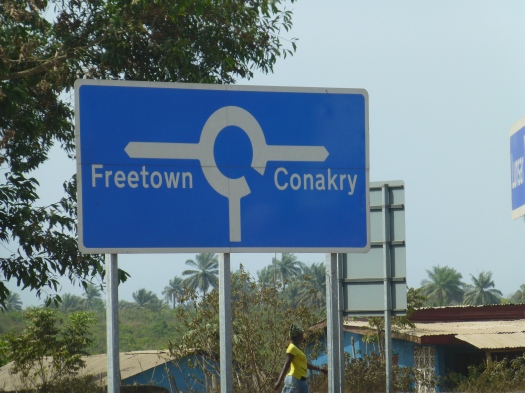 Time to get on the road