The spit of land extended about half a kilometre into the lagoon, and we had to double back a long distance to traverse the muddy inlet behind.  The water at this time of day was just too deep to walk across, although as we walked around several branches of the lagoon, the tide fell away to reveal large sandy banks. 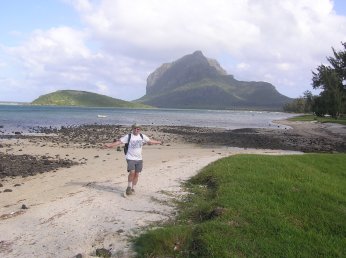 On the way to the morne

Giggling and laughing into the distance

We heard some splashing and giggling nearby.  Five teenage girls and one slightly younger boy with two dogs emerged from the wood.  One was carrying a white bucket (which probably held paint at some point in its history) and two more were carrying a large green net.  They waded straight into the water then spread out, unravelling the net between them as they went.  We watched them trawl through this shallow inlet, heading upstream to the shallowest part.  As they reached the exposed sand at the end, the net was alive with silvery fish battling to escape its clutches.  Still laughing and chatting, the girls set about picking away at the net and dropping the fish into the bucket.  They then reversed their walk and trawled out to a sandy bank and out of our view.

As we took the next headland the Morne revealed itself in all its glory.  We could see ahead for the next five kilometres of our walk – the kite surfers in the far distance looking like little sand flies biting at the ankles of the World Heritage Site.  We noticed that despite the lagoon being expansive here, wave energy across the shallow rubble platform must at some times be very high as here and there along the high water mark was evidence of erosion, or of trees being brought down and ripping up the sand as their roots disengage.  These events must be short in duration but severe and targetted as most of the beach was accreting sand.

As we approached the first of the resorts that day, the kite surfers were racing up and down close to the beach.  Kite surfing at that time had just reached IN status.  Users were revelling in the flexibility in the water of being on a surf board, not at the total mercy of the rollers that an ordinary board would be, nor weighed down by a sail, but still plenty of control to move around on the water and perform tricks.  I’d once taken a lesson in windsurfing in BVI and completely exhausted myself hauling myself out of the water every time I tried to turn a corner.  I’ve never had the upper body strength to lift my own soggy weight.  Kite surfing looked similarly difficult to one who had had very little sporting coordination since the days of tripping over his football boot laces in primary school.

On various windy beaches around Mauritius, it was the South Africans who seemed to be the most experienced kite surfers.  Some tourists giving it a go for the first time at best looked nervous and hesitant to build up speed, at worst they were gung ho and I saw several examples of people being blown by the wind up on to the beach and into the nearest coconut tree.  In the hands of an expert, though,  the artistry as superb.  As Jeremy and I walked along the Morne’s beaches, a teenager passed us, kicked his board high in the air, looped himself round, turned his kite 180 degrees and forge ahead at exactly the same speed, all in one smooth and impeccable movement.  “Show off” we said simultaneously but in fact we were just plain jealous.