Edsel and I walked up beyond this planting site on our first trip, taking along Greggy from the Environmental Health Department.  One path, called the Dew Pond, reached the very summit of Green Mountain.  It’s a relatively short path but steep in places, and made difficult by the humidity and general sogginess.  The thick vegetation of trees and bamboo trap the cloud, condensing the droplets that then run along branches, drip of trees, down trunks and settle in a sodden mossy mess on the ground.  Even the boardwalk put down here is little improvement over the muddy ground, and you have to watch out for slips and slides.  The Dew Pond itself was another ingenious device of the early settlers who wanted to farm up here.  The water captured by the vegetation up here was funnelled into the pond and taken down in a series of small pipes and storage tanks to water the crops below, although the creation of the water catchments was successful on a far larger scale and largely superseded the Dew Pond.  The pond itself is almost completed surrounded by huge bamboo stands, and is laced with water lilies and guarded by a plastic green alligator.

At the Dew Pond 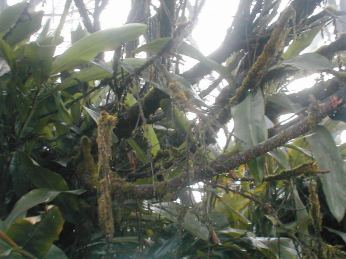 Water storage for the dew capture 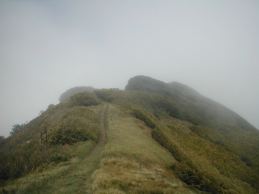 The misty view from beyond the peak

The Dew Pond is where the local Letterbox is sited, the destination of a one of a series of walks publicised as tourist attractions on the island.  You can go higher, but the walk to the peak is a bit of a disappointment, there are no amazing views as the tree cover is thicker than ever, indeed even if it were not the top of the mountain spends so much time in swirling cloud and piercing winds you probably would see nothing anyway.  The peak is obvious – the path drops gently down on the far side, but just in case  you miss it, someone has put a piece of anchor chain up there – some macho runner who has gone from sea level to peak in twenty minutes with it around his shoulders, no doubt.  The path does continue onwards to a break in slope, and the scene opens up to reveal the eastern part of the island.