We had come to a halt, still in open water but only a few yards from the right bank.  We could observe the hippo activity completely now and we watched them yawn, those huge gaping jaws showing off the chunky tusks on each corner.  A low laugh would come from different individuals; it really did sound like a slow and deliberate guffaw and its echoes vibrated around the riverbank and into the forest. 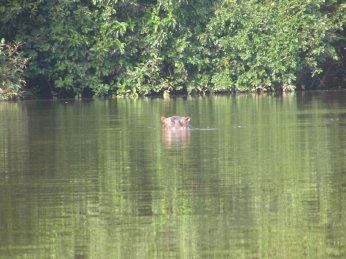 The bull takes a stand 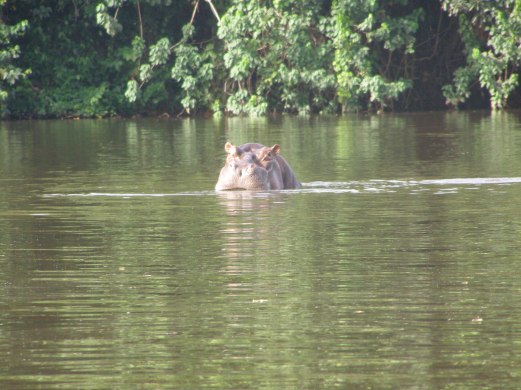 We grew aware that the bull was not all together happy with our presence.   He would gently raise his head, maybe to get a better look at us, maybe to show how big he was, and it would be associated with a blast of air through his nose which would send a spray several metres across the water.

All together with some young as well, we counted eleven hippos.  The young had now gathered close to their mothers.  We asked the warden whether it was safe to remain here.  He seemed pretty relaxed so we continued to watch, although I did glance up at the bank to my right to see if there was an escape route if I needed it.  In theory hippos are safer in water than on land.  They feel calmer as they know they can submerge and move along the bottom, and as long as we did not directly confront them they would continue to wallow.  They felt nervous and vulnerable on land. And at least in water if they came for you you might get a glancing blow and the water would take you away, on land the weight of a couple of ton of sausage would give you some nasty injuries… or so I rationalised.

Their behaviour continued to worry everyone but the warden.  The bull had found a rock or sandbank in the river and was now raising himself out of the water past the shoulders while flapping his ears menacingly at us and continuing the snorts from his nostrils.  Without us being aware of it happening, the rest of the family were now stretched up and down the left bank in a line about 100m long.  A couple of the younger hippos were also mimicking the dominant bull; facing us and doing the same manoeuvres.

It was when the bull submerged and then re-emerged about 20m closer to us that the four tourists decided that enough was enough – nice to get so close but no need to aggravate them further.  The river was wide at this point but a couple of the hippos were now upstream of us and in theory could cut off any attempt to retrace our cruise.  There were still several hippos below us too and we were steadily being ambushed.  So we told, did not ask, the guide that we would go.  I put away my camera and quietly picked up the second oar and we turned the canoe round as gently as possible to face upstream and without making a ripple, pushed off… literally.  Hugo and Gray had come to the same conclusion and also made off with as little disturbance as possible.

Whether the ambush was us just being paranoid, whether they were blustering or were just moving around their patch, we shall never know, but our gentle exit from their pool seemed to diffuse any tensions and they never followed us further upstream.

As we progressed further away from the camp (and from the road from which most interlopers are likely to have travelled) the vegetation became wilder.  We journeyed through a still pool of water for nearly a kilometre.  Then I notice up ahead that our way was almost completely blocked by rocks jutting out of the water.  A few of these were full grown islands on which were small trees.  I noticed many birds took up perches here, no doubt hoping they were safe from jungle predators.  As we got closer, I realised that the rocks did not cover the whole riverbed, nor even cause any cascades, the water moved smoothly through several well defined channels.  Once or twice we could see submerged rocks that slightly scraped the base of our canoe, and I could imagine in the dry season navigating by canoe would be much more difficult.  And by seeing the exposed areas around us, I could also see that in the main wet season the river level could go much higher, and again the currents might stop easy navigation.

As we followed the twists and turns of the river through these rocks we became aware of a lot of bashing in the trees to our right.  Monkeys were bouncing from branch to branch; eventually we realised they were tracking us from the bank, rushing along for a few seconds then peering out at us to see what our reaction was.

We dropped down below the rocks in to another large still pool in the river; it bent gently round the left and opened up into a long strait.  The sky had all but cleared, just the odd small cumulus cloud peppering the horizon, and the water reflected it like a mirror.  With the exception of a few slight ripples, and the odd ring created by a gulping fish, the only break was way in the distance.  Through binoculars I could see two brownish lumps above the water edge – maybe more rocks, but then I noticed something flickering above these rocks; their ears.  The rocks were moving too and causing a little ring of disturbance around them.  We were fast approaching a herd of hippos.  As we got closer it was obvious these creatures had been observing us since we turned into the strait but they were calm about it; they just watched, occasionally flicked flies with their ears and apart from their eyes and forehead, nothing else of them could be seen.  The warden was quite happy to lead us close to them, on the shore furthest away from the herd.  As we drew parallel we were aware it was not just two animals, more heads appeared from below the water also not too concerned with us.  The first animal we had spotted still intently watched us, and was well positioned between us and the rest of the herd.  It was fairly obvious this was the dominant bull protecting his family. 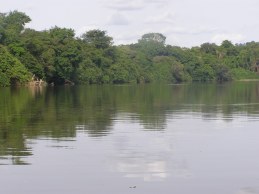 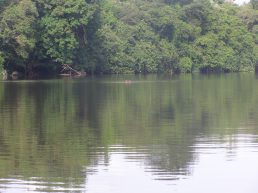