The crater lake is deep, and it quivers with activity.  The offerings which fall off the concrete slabs are gobbled up by monster sized eels.  Birds drop in and take what they can, and troops of monkeys patrol the area – they know a good feed when they see one.

High above the south side of the lake are a couple more temples; always interesting to take your shoes off and observe the colourful statuary, marvel at the worshipping of the penis through lingams of various lengths and thicknesses, absorb the aromas of different incense and spices.  But to me, my geographical passion was sated more by the extreme views up here.  You are close the highest point on the island, and at this location alone can you look down on over half the island.  And it all comes together.

The mountains in the distance

You have to have the right day to do it.  I have been to Grand Bassin several times when the cloud base was low, or the haze made it difficult to see beyond the local forest but come up here on a sunny day soon after rain and you will be treated to this panorama.   The forests and reservoirs of the south west dominate the near scene, but to the south east and further out you could see the cane fields stretching away.  All the little mountain ranges around the island could be picked out from this point.

The long road for pilgrims 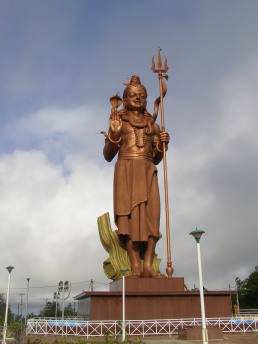 As I mentioned, I had passed through the estate at Bois Cheri several times on previous visits; just the factory with its limited opening hours had never been open when I passed by.  The road was a winding B road which first traversed through a couple of villages, including the settlement of Bois Cheri itself.  It then opened out to this windswept hillside of tea fields.  Leaving the factory entrance to the left it continued to wind upwards, opening out at some places with spacious passing places.  In fact the road widens to include a capacious footpath.  A pine forest closes around the road as you rise, but not before you see the most incredible bronze coloured statue peering over the top.  And then you are at the top of the hill and the road spreads into the most enormous series of car parks.  The collection of pink buildings mark your arrival at one of the most sacred Hindu sites in the world; Grand Bassin.

The story goes that two priests saw a vision of the water of the Ganges coming from the crater lake at Grand Bassin, and they linked it to a story of the great Hindu god Shiva, who was taking his wife on a round the world flight to show her the most amazing places in the world.  Shiva carried the River Ganges around with him on his head wherever he went (purportedly to stop the world from flooding) , but after they had stopped in Mauritius and were picking up speed to depart, some water from his head fell into a volcanic crater and formed Grand Bassin.

Since the end of the 1800s, the site has been this place of pilgrimage and every year somewhere at the end of February, hundreds of thousands of people will flock here and walk from the Bois Cheri direction or along a wide straight road from the west to enter Grand Bassin on foot.  These massive car parks takes hundreds of buses, and the pilgrims are not just Mauritian but from India and elsewhere.  For the rest of the year the surrounding countryside looks like an out of town shopping mall without the shops, but the actual crater area is preserved well.  Dotted around a large round lake are a series of pink temples, with the usual array of statues of Hindu gods.  On little concrete tables around the lake and in front of the tables, people leave all kinds of offerings; garlands of flowers, bananas and other fruits, nuts and incense burners, or oil burning in little clay saucers or diyas.

Monkeys eye up the offerings

the huge car parks and infrastructure for the pilgrims

On one or two stretches of shoreline, a series of shallow steps head into the water.  When I say steps, this is not just a small staircase, this is a 100m wide platform that allows hundreds of people to enter the water to wash at once.