I’d recently had some quite intense safety and security training for MapAction.  One of the items we had talked about was that if you are inside a building and you hear shots, your natural reaction is to go to the nearest window and see what all the commotion is.  The right reaction is to do the exact opposite and find the solidest piece of furniture you can hide behind.

In the Kinam, as the rest of the hotel headed out to the gate, I was glad to override the natural functions and I crouched down behind a nice firm stone pillar.  There were only a few shots but the reaction of the crowd outside I could guess at by the screams and shouts- and the fact the noise suddenly became dispersed and less uniform – people were scattering as fast as possible away from the gun or guns.

The situation dissolved nearly as fast as it had erupted and I went back to the laptop to continue working.  On chatting to a waiter ( after a couple of weeks my French was fluent enough to make a conversation of this), I found out the horrific story behind the commotion. 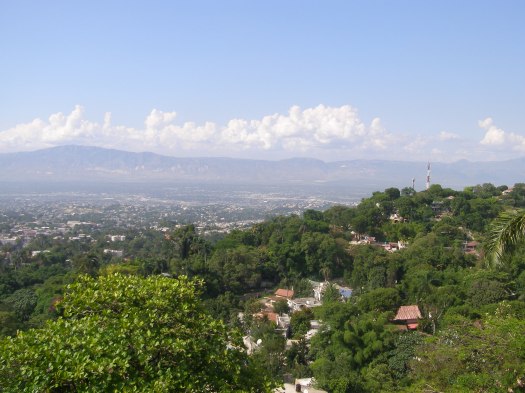 Earlier that day a police car had smashed into a market stall.  They ran over and killed a woman then drove off without even stopping,  The market stall holders had rallied together and with a few hangers on, hastily organised a protest march to gather at Pertionville’s police station which was on the southern side of the town square.  The gun shots had come from the police who had tolerated a few moments of protest but did not want the marchers to reach the steps of their workplace.

These kinds of stories were not necessarily daily occurrences in Haiti, but they were far from infrequent.  Several times when I had been  at the Ibo Lele, I would hear a bang, maybe a vehicle backfire but could be gunfire. We’d see people fighting on the street – maybe over a bang on a car, maybe kids falling out over some trivial issue, the flames in their eyes boring into their opponent’s skulls as they eyed each other up and the crowd would egg them on.  There would be market mamas arguing over a sale, a man, or just a bad day.  This town had an edge that continued to bubble up to the surface and cause more harm.