Stevan had a wild idea to go and find another place he had been told about on the development worker network.  It was called Franco’s which to be honest seemed a strange name for somewhere in Sierra Leone.  He had vague instructions for how to get there – it was in the Sussex area down that peninsula coastline.  Stevan was a savvy South African.  He had only been established in Freetown for about a month when I arrived but had established a small network of reliable drivers to get him around and one of his main guys turned up at my apartment.  The driver had already collected Ezra from his hotel and Stevan from his apartment up the street from me and we drove through the usual mix of traffic in the dark and wet of Freetown.  The centre of Lumley was chaotic, the Chinese were trying to build their dual carriageway through a thriving market place which even at this hour was throbbing with activity.  Once out of town progress was still slow.  This taxi was an series of metal sheets held together by the rust, so to preserve its longevity, the driver would go at barely 10 miles an hour and drive round every pothole.  In the dark the journey was interminable – we got mouthed off at by a herd of Boers who tailgated us with full beams then shouted obscenities at us as they zipped off in front leaving us in a splatter of mud.

Stevan tried to spot where our destination was in the gloom.  We saw a sign on the right hand side of the road which said “Francos, 800m”.  This was very encouraging and we crept along the right side of the highway looking out for a second sign.  But we ended up in Sussex village itself and Stevan declared that we’d gone too far – it was supposed to be on the Freetown side about a kilometre from Sussex.  Now, being a geographer I always have problems with directions which tell you to do something a kilometre before a town.  We came back along the road and ended up by the sign again.  This time I noticed in the head lights that while we had seen the “Francos, 800m” quite clearly, the small arrow pointing off the road was almost invisible.  Bit of a doh moment.

We bumped down a very ill made road which appeared to be heading for the centre of a village, but eventually we saw white fluorescent lights and a big gate set in a whitewashed wall.  After parking up we had a wander into the compound.  All was deserted.  It was after all the wet season and while we had been driving along it had started raining once again.  But the lights were on and the tables were set in a grass thatch roofed restaurant open on three sides to the elements.  We ordered a few beers and some fish and while waiting for it to be cooked up we took a brief look at the resort.  Although pitch dark out the front we realised the restaurant opened out on to a beach in a sheltered bay.  To the left was a large old house which was “Florence’s Resort”.  Florence and Franco were a married couple and you could tell that one looked after the restaurant and the other the hotel side.  Indeed this old Italian grandfather type came out of the kitchen while we were there and sat at a table at the back of the restaurant. A few other people did arrive while we ate but even though the atmosphere was subdued, Stevan took an immediate likening to the location.  He was a rather manic man to say the least, always talking so fast and on diverse topics it was a struggle to keep up with him, but you could see the bustle and hustle in Freetown could be very wearing and Franco’s seemed like the perfect oasis for him. 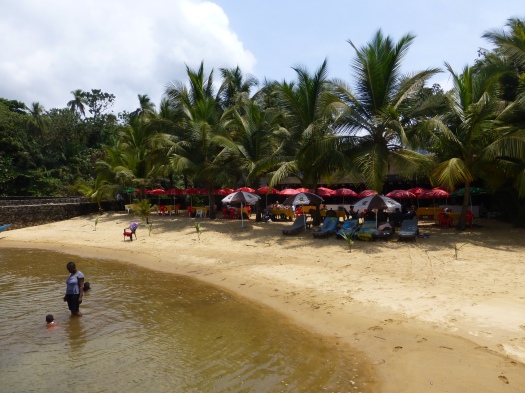 Francos in the Dry Season