There were some dark clouds hanging over Soufriere but the day was hot and sunny and we decided we would take a chance.  We stepped out into this alien world; even the feel of this grey dust under our feet was weird.  Strange sights continued to bombard my eyes – a typical Caribbean villa, the bottom storey almost completely submerged in the mud.  The branches of dead trees poking above the mud as if a nuclear explosion had ripped through the island.  In a way… one had.

We picked up a few stones – I was astonished at how light they were.  a piece of pumice  larger than my head could be balanced easily on a couple of fingers.  Over to one side we spotted a dust cloud emerging from the ground.  Intrigued we both made our way over to its source; only to be confronted by a large green iguana digging under one of these pumice rocks.  We noticed there were several of these creatures digging large burrows in the ash; either to have a cooler place to hide away from the mid day sun, or maybe to lay eggs in a safe place. 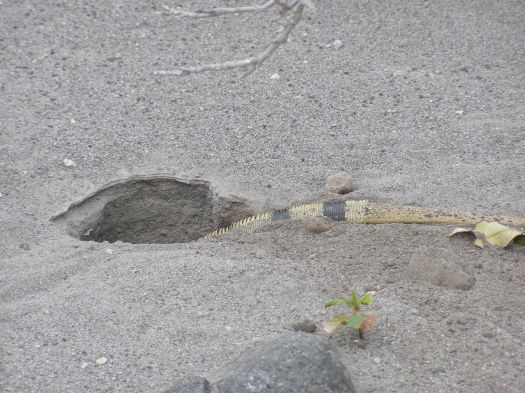 Iguanas in the sand

There was a hint of rain in the air and despite there being no risk of it turning the Belham River into a flood zone with an imminence we decided to head back to the vehicle.

Scriber asked if I wanted to go on and see if we could see more. I was aware of the time (it was past midnight now) and how these guys had gone out of their way to drive me to the other side of the island to see our quarry.  So I thanked them and said no, we should return to our beds.  The visit a success we descended back to the vehicles and I was dropped off at the gate to our villa.  I quietly stole in and went to bed a happy man.

My work time in Montserrat was nearly done – I had a bit of training to complete the next week on one day before flying home, and I was continually making tweaks to all the databases I had created, but Matt and I decided we had to have a little downtime over the weekend.  Geoff had gone back to the UK on the Friday evening so Matt and I decided we would take a drive down to the exclusion zone.

I had noticed a network of poles around the island on which were sirens.  They were used to alert the residents of any harmful volcanic eruption – of course the chance of evacuation when there was a really large discharge from the volcano, but there were also other hazards.  There is a continuous stream of ash and smoke coming from several vents in the Soufriere mountain and small ash falls were regular.  It might settle out as a fine dust, sometimes as a pseudo-snowfall, and had a habit of covering everything.  If that were the end of it people might be OK to cope – get out the brooms and the switches and push it off into the bush or ghut.  But the ash had been belched up from deep below the earth’s crust and was full of noxious chemicals; most abundant of which was sulphur.  The smallest amount of water and the dust turned into acid that ate into everything.  It is particularly fond of tin roofs, and cars.  Left without cleaning, and maybe with a dose of warm Caribbean rain, a car can rot away in just a few weeks. 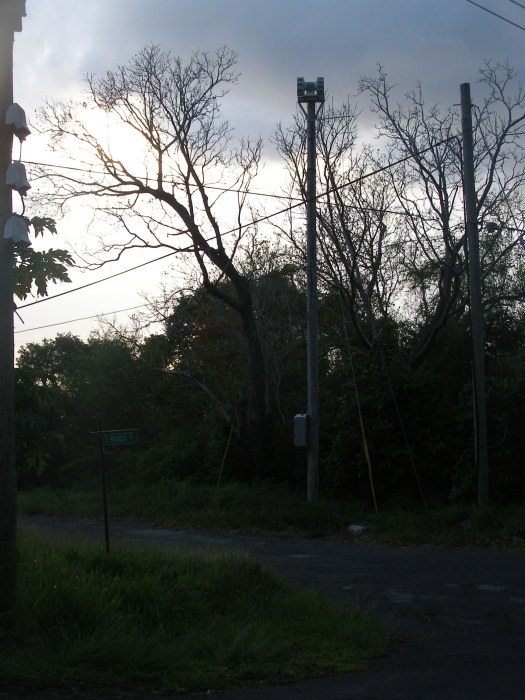 I woke up a couple of times in our villa and found a film of ash across the veranda.  But more often than not there was a curious smell of bad eggs in the air.  The volcano would fart toxic gases that would blow over the villages.  My lips would capture these molecules and more acid would be created as it mixed with my saliva, leaving me with a tinny slightly painful taste in the mouth.

Alongside the stress on the people, the volcano obviously did untold damage to the environment.  As well as being an intensively farmed area on its lower slopes, its upper reaches and several valleys were rich in fauna and flora.  Before the eruptions, several studies had looked at the ecology of the southern hills around Soufriere.  The significant hills of the central region had been less studied and more or less dismissed as an area of less interest.

With the eruption both turning much of the southern part of the island into at best a fresh landscape ready to start again with lower order plants, at worst an arid moonscape poisoned for centuries, the unscathed Centre Hills became more of a focus for environmentalists.  And what they saw surprised them greatly.  There was both more biodiversity here than expected, and it was home to some of the more bizarre plants and animals that Montserrat contained.

With the national level of resources in government at an all time low, and focused on rehousing, rehabilitating and rebuilding the infrastructure and life on the island, there were few resources to look at this biodiversity.  As with other islands I had worked with, especially the Overseas Territories, some big names from the UK were trying to assist.  In 2008 I was asked to assist with a particular project that the UK Government’s “DARWIN” initiative had funded,  that was to write action plans for all the key species in this region.  My role was to look at the monitoring of these creatures and plants and see how it integrated with the government’s GIS.

I’d wanted to go to Montserrat for many years but so far had only seen it smouldering in the distance the many times I came into land in Antigua Airport.  Montserrat had come and seen me once.  When I was living on Tortola, I had gone to California for a conference and when I returned to my apartment high above the sea, I found a thin layer of red dust covering the whole terrace, including the tables and chairs.  Montserrat had had another eruption and the particles had been blown on the wind over 200km to the Virgin Islands.  I’d also met a few people from there and had tried a couple of times to formulate projects. 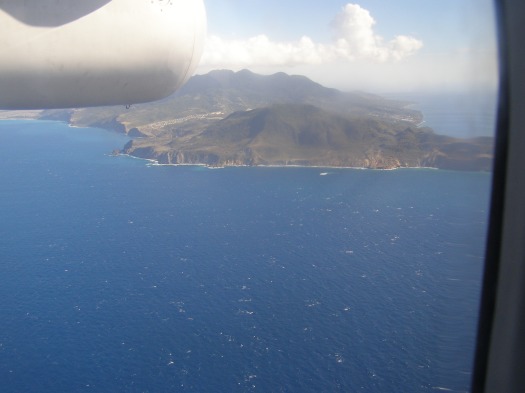 Life of the island was turned upside down, even geographically.   The southern third was left as an uninhabitable exclusion zone, a further third declared an intermediate zone where no-one can live but some activity, the odd farmer’s field, can continue.   The rest of the island’s activities are squeezed into the remaining third, previously the less developed end of the island.  The government was located on a steep hillside at Brades near a small sheltered bay on the north western side of the island.  With no functioning airport everything  had to come in by sea to this bay.  The population reduced to only 3000.  The social and economic problems associated with this upheaval caused great tensions, exacerbated by an insensitive reaction from the UK Government, culminating in the response from Clare Short when the Montserratians asked for more help that “they will be asking for golden elephants next.”

The activity at the volcano eventually calmed, but with occasional large events and frequent clouds of sulphur, ash and material flows, Soufriere is still a dominant neighbour of the nervous Montserratians trying to re-establish their lives at the other end of the island.  New estates have now been built on the hillsides and some returnees have swollen the population up to nearly 6000.  The smaller villages down the west side have remained too, and a new capital at Little Bay below Brades is being formalised moving from emergency portacabins into proper buildings, for government, market, infrastructure.  A new airport was built straddling the central ridge of the island in the north.  It has been a slow process. 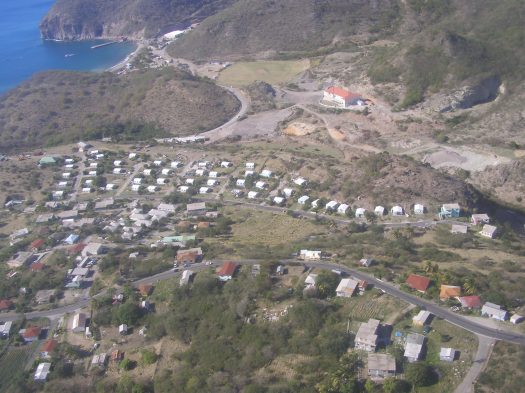