The other animal of interest was the mountain chicken.  And this was not a chicken – what was it about giving Montserrat animals the wrong name?  The mountain chicken is in fact an amphibian.  It is a rather large frog that is so rare it is only found on two islands.  Dominica and Montserrat.

I have a confession to make.  I once ate a Mountain Chicken in Dominica.  At a restaurant at one of the best hotels in Roseau, I was served a pair of frogs legs sautéed in lemon sauce.  It did indeed taste like chicken.  At the time the Dominica mountain chicken was quite common and it was a local delicacy but by the time I had got to Montserrat,  a fungal disease called Chytrid had decimated the population on Dominica.  Montserrat had a smaller population to start with, but had remained chytrid free.  Like many other species though, its range had been curtailed by the eruption in the south of the island.  For the conservation team this was the jewel in their crown and a heavy responsibility.  They were attempting to make sure that the chytrid fungus would not enter the island but this was no small matter.  Fungi are notorious spreaders – their reproduction vessels are tiny spores which blow through the air, or get attached to other matter.  Small islands rely on imported goods so much and the spores can be transmitted in cargoes the world over.  Montserrat had set up a checking routine at the customs house at the dock but it was impossible to check everything.

So far the Montserrat mountain chicken had been lucky to avoid fungal infections but many other threats still existed.  Their numbers were already quite low before the eruption and now the Centre Hills were their last stronghold.  At the fringes of the forest they were vulnerable to predators, mostly domestic dogs and cats.  Another interloper, the cane toad, was thought to be muscling in on the mountain chickens’ habitats as well. 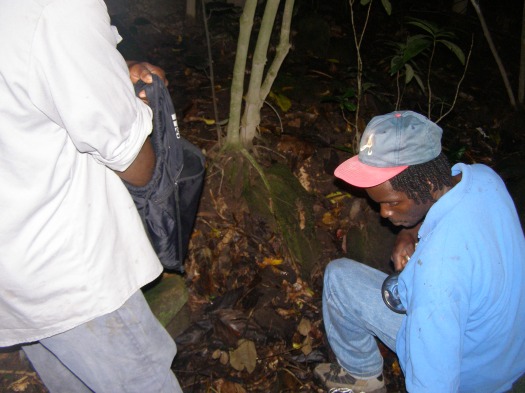