Namwala is the district centre for the region, but like several old colonial towns in amongst the chiefdoms, has little historical legacy; it was constructed as an administrative convenience – a place where the functions of the district can be collected together.  A small settlement has grown up around this to service the residents, but as we drove through its main street, I could see it was a relatively quiet town. 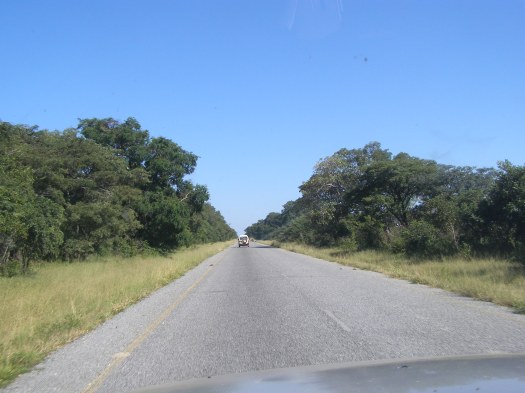 Entering Namwala on the tarred road

We first paid a visit on the District Commissioner.  As opposed to the chief, this was the Government’s chief representative in the region, and his office lay in a small compound where many of the district’s administration occurred.  It was a one storey building built around an open courtyard; almost like cloisters, but the hubbub inside was hardly monasterial.   In here were offices for health, social welfare, education, business licenses and all manner of other financial and support offices for the whole district, and people had walked, biked, or caught lifts on lorries or buses to do their business.  The queues outside each office were long and immobile and as we gathered outside the District Commissioner’s office itself, I was aware of a hundred sets of faces looking at us; old and young, mainly women but some men of all ages too.  Women held babies that cried or slept; older children were standing still, bored stiff at having to wait so long.  Occasionally an official would emerge from an office, clutching manila files, and saunter slowly along the open corridor from one door to another.

We were allowed to enter the DC’s office within a few moments (when we came out I could hardly discern a difference in the makeup of the other queues).  We were greeted warmly by the DC himself and invited to sit around a couple of those ubiquitous heavy sofas set about a low coffee table that every high ranking official in Africa seems to have.  Ian explained the project and got some valuable information from the DC.  More than the villagers from the previous day, the DC was concerned about the control of the river from the big electrical statutory body, ZESCO.  We chatted for a while, but my eye was turned to a large map on the DC’s wall.  Up to now I had been struggling to find a map of exactly where the modern day chiefdoms were.  All I had was the old maps from the British Overseas Surveys 1:50 000 maps, that I knew were outdated.  This guy had a modern GIS generated map on his wall showing all the names of the chiefdoms.  I talked with him for a while about it and he said it had been created by a commercial company in Livingstone for the House of Chiefs.  I would write to the agency to order but there was little hope of getting a positive reply, so as a precaution I took as many photos of the map as I could, trying not to blur the edges, keep the view perpendicular and not use the flash to avoid reflection, and hope I could stitch the photos back together later.  It is a practice I have learnt the hard way over the years.  On my first trip I had found some wonderful weather data at an agricultural establishment in the Zambezi Valley in northern Zimbabwe.  I had talked to the man for ages about it and handed over my card with address in UK and asked him to send me copies of the data.  How naive; I now realise there was no incentive for the man to do this, and no money to photocopy and post the results.  And as for him copying by hand?  Well; I was very young.  With digital photography it has become so easy to capture data that others have spent time putting together and as long as you attribute its source correctly, data’s value are so enhanced by being spread further.  In the end with the Chiefdoms map I spent several hours carefully piecing together the photographs and making a rough estimate of their extents.