The clay here in Fintonia was bright golden and great stacks of bricks had been extracted.  In another location under some trees we found more excavation going on.  A whole family were eagerly digging away in a pit over 10m square and already several metres deep.  They seemed pleased to see us and willing to show what they were up to, pose for photos which we then showed them through the viewfinder to hoots of laughter.  The base of the pit was completely churned up and they were putting the clay into buckets of plastic bags and hauling it up to a dry area in the sun to form the bricks.  They had several ways of forming the bricks with different results.  Some of the bricks looked misshapen and were hand crafted, others they put weights on or formed them from a simple wooden or metal mould.  The clay in the bags appeared to be being taken off to be used to make pottery.  It was all surprisingly industrial for this small rural village.  But here and elsewhere the clay was transforming the landscape.  The traditional “mud huts” or rondavels that were so typical  in Zimbabwe in the 1990s were being replaced by square, quite substantial buildings with galvanised roofing and proper doors and window frames.

This family were interested in what we were doing so we laid out the satellite image on the ground on a dry spot up the slope from their pit.  Covered in a grey slime, they heaved themselves up out of the clay, wiped their wellington boots on the ground and stood around us as we explained the project.  I’m not sure they got the whole story of the property rights issues, but they were fascinated by the satellite imagery.  I know from past experience that people often can interpret satellite imagery easily; once you have orientated them a little they are away.  We showed them the village centre and the roads heading out in  different areas and soon they were pointing out where we were currently standing and where they lived, as well as the school and the community forest.  It was all very encouraging. 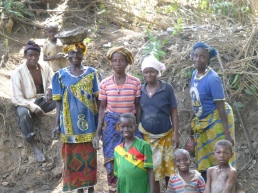