Most people were happy to see us.  One or two of the ladies would shout at me to not take photos but most wanted to pose and see the results in the viewfinder.  One or two people wanted to shake my hands but as soon as they did they withdrew their grip immediately and said “ooooh – smooth hands”.  It happened a number of times.  Yes, compared to the hard calloused fingers and palms, my pussy little hands were like silk to these people.  I admit – apart from a little gardening and the odd piece of restorative DIY, I never do manual work.  All I have to show for hard graft is the RSI that I have from years of typing at a computer.  They laughed and giggled and guffawed at me.  I took it in good heart but it was a good example of the rift between these hard working people collecting raw material and using hand tools at the end of a supply chain and my internet and interconnected life where my skills are passed through my fingertips to machinery.  Not even machinery; digital electronic symbols.

Jan had a chat to some of the village elders, apologising for not bringing the photos he promised, and we started to head back to the vehicle.  We left them behind collecting new wood and busily making their fuel in the hot steamy sunlight.  When the Ebola crisis emerged, it was this isolated village that my thoughts turned to first; how many were affected, how long was it before anyone from outside realised they might be ill or dead.  How many survived.  I’m sure many did.  Despite the uncertainty of this disease, I’d seen in the countryside around Freetown how resourceful and hard working people can be, how they had already survived years of abuse, civil war and poverty,  and I am sure they would have found a way to deal with these new challenges. 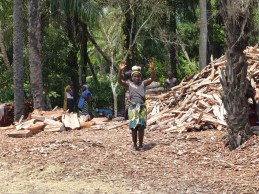 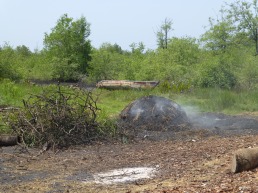 We had to park the car at the entrance to the village and then negotiate a marshy stream to end up on the drier higher ground on which most of the settlement had been established.  They were under a huge canopy of trees but the ground below had been cleared by people, goats and chickens.  I noticed how black the soil was and realised it was a combination of a rich swampy soil and years of charcoal burning which was the main source of income for the village.

Jan was greeted as an old friend – he’d only been there once but you don’t get many white guys down this cul de sac.  I was introduced to people and we asked if we could go and look at what was going on.  We walked as near as we could get to the river.  It was flowing past some mangroves in the distance.  Obviously the tide still reached all the way up here.  To our right, a large tributary served as an area to moor their dugout canoes, from which they were heading out into the mangroves to forage for wood.  This was being brought up on to the muddy shoreline and chopped into convenient sizes.  Close to the stream they were being neatly piled, but further in they were arranged with their ends pointing towards a central spot and steadily built up into a rondavel ready for lighting.  I could see the next stage of the process to my right, where river mud had been packed over the pile and the centre set alight.  Smoke was now dribbling out of a few holes in this mudpack but inside the wood was steadily cooking to turn it in to valuable charcoal.

At the charcoal village 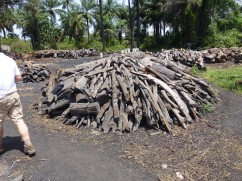 Not all the wood was used as charcoal – huge piles of logs and timber poles were stacked up all round the village.  In some ways it was very industrious and they obviously had access to an amazing resource.  But I did find it jarring that my project was trying to protect the Guinea biome in the north of the country and here there were similar levels of logging and stripping out of slow growing wood to meet the insatiable demand of Greater Freetown for building material and fuel.