While the day was more of the same; the job itself was very easy.  Where I could I would peer into the water to determine what was going on.  It was mainly rocks with the occasional scraps of reef; hardly any seagrasses.  Here or there white sand had become trapped but often as not the wave energy was too strong for any deposits to stay fixed.  And in other areas the waves were so intense that both on the satellite imagery and in reality, you could not see below the water for all the foam and spray. Similarly on the landward side, there was very little to monitor.  There were no coastal protection features; the cliffs did a good enough job anyway, and for the most part there were no pollution problems.  The worst pollution we saw came from a fast flowing stream coming down from one of the cane factories on the hillside way inland which was black and thick with charcoal residues from where burning had taken place.  It flowed into the coastal woodland and settled in a gloopy swamp before the stream disappeared into the rocks and fell off the cliffs.  We could see the small plume of black discharge out in the sea but the high energy waves soon dispersed it. 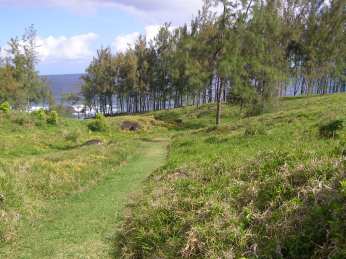 A rare piece of polluted water

We approached an area where there was more human activity again, but it was what we could term artisanal.  There was evidence that people came down to fish off the rocks, or borrow sand, hold barbecues and leave litter.  There were even more open areas of pasture in amongst the wood and cattle grazing.  We passed very close by a rudimentary farm – at least accommodation for a stock watcher, and associated barns to store some feed and allow the cattle to shelter from the worst of the weather.  Outdoor grazing in Mauritius is a rarity, most being held in enclosed pens and barns and it was a shock to smell the long forgotten odour you get from manure and livestock after so many months of living next to sugar cane.  Even this enterprise seemed half hearted.  At one time there had been a series of paddocks divided by thick tall stone walls, but now many of these walls were broken down, only the tracery of their course discernible in the undergrowth.  How long this area had been wooded was difficult to determine.  The trees looked small but given the buffeting they received from the south eastern winds hitting the coast, it was likely they were partly dwarfed and very slow growing, so could have been there for over a century.

The quiet, slightly decayed beauty of this whole coastline was also faintly disturbing, and I never felt at ease in it.  That feeling was amplified when we heard not one or two but a whole pack of dogs barking, a hundred metres or so to one side of us.  We were used to cane dogs, they were frequently seen in the cane tracks around Calodyne.  Most of them were timid feral mongrels, half starved and disease ridden, but if they occurred in packs they gained significant courage.  As I’ve said, I always carried a few stones in my pockets in case one or two of them thought they would have a go at me.  Here we jumped up onto one of the more complete wide stone walls and picked up a few of the loose pebbles from the top.  We heard the dogs crashing through the undergrowth, but never saw them and eventually felt secure enough to move on. 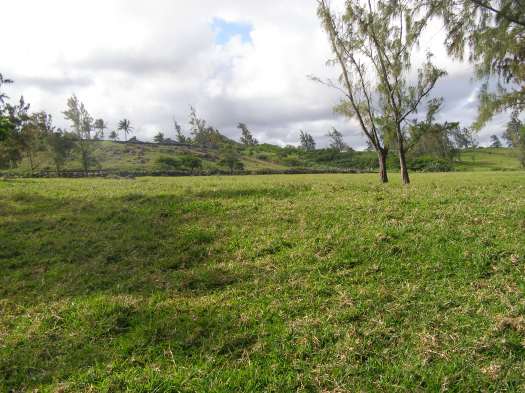 A rare piece of grazing land near the coast