Our second Pressure Zone was the stretch of the east coast usually referred to as Palmar or Bellemare.  Whilst not where the earliest set of hotels had been developed on Mauritius, it was certainly now packed with resorts and golf courses, but also had some of the longest stretches of Public Beach on the island.  A great favourite particularly with people from the urbanized centre of the island, at weekends almost every inch of the parkland under the filao trees were covered in large family groups, spread out over several blankets, perched on what seemed to be dining rooms chairs as well as deckchairs, or just sitting in cars or eating out the back of a minivan.  This last set of practices had been a cause of great stress for the Beach Authority who managed these Public Beaches.  The parkland was usually open to the road and people drove straight across to the point they wanted to picnic at, often close to the edge of the sea, and stopped.  A network of hard soil tracks had grown up, damaging the vegetation and causing occasional quagmires after heavy rain.  The Beach authority were actively trying to make better car parks at key points along the beach and put up logs, bollards or piles of dirt to stop people getting into the park.  Until the Beach Authority  could complete their ring of steel, people still snuck through any gap they could find.

The beauty of filao trees

The tourist brochures may be full of palm trees and many resorts planted thousands to keep the idyll sacrosanct but the dominant tree along the Mauritian coastline is undoubtedly the filao.  It has become a pest of so many tropical coastlines and goes by the name of ironwood, Australian pine, beach oak, she oak and agoho.  Its scientific name is Casuarina, but most people in Mauritius refer to them as filao.  They grow tall and slender, the trunk clad in tough grey bark that branches down to small green twiglets with tiny leaves on.  The roots are shallow but extend widely across the sandy soils they grow on to gain the tree’s stability.  A single tree looks elegant enough but a wood of them produces a perfect picnic ground.  The root systems preclude other vegetation getting a strong foothold so only a grassy covering is possible, and since they grow relatively close to each other, there is enough shade across the woodland.  The light filaments of the twigs and the flexible branches are teased by winds and respond with a slightly haunting whooshing resonance even in a light breeze.   They mark out the territory of the majority of the Public Beaches and are ingrained in Mauritian culture, and some still say they provide a useful purpose as a halt against coastal erosion as the roots bind the top layer of sand together in all but the worst tempests. 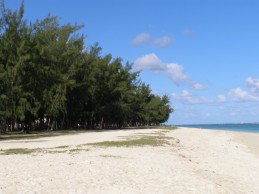 But are the filao a monoculture blocking other natural vegetation out…

Filao trees have as many enemies as friends.  They were introduced to the island for the erosion purpose, but have spread prolifically and at the expense of other species, including natives.  Some claim their erosion control role is overplayed and that when a filao tree uproots the erosion is worse as there is nothing else growing at the time to bind the sand and large blast holes are revealed.  Far-reaching  programmes to eradicate the filao have been put forward – but fortunately not implemented. To destroy so much mature vegetation in one go both would hurt the environment more than save it as re-establishing natives would take so much time.  Also, the aesthetics of the filao woodlands are one of the most charming aspects of the Mauritian coastline, for tourist and Mauritian alike.