So much for domestic life.  This was one of those projects that are actually quite rare in my line of work – long periods away, living amongst people with whom you work.  I knew one of the people from before, Paul.  He had worked at NRI for a time and its sister organisation NRInternational, and we had once met up in Dar Es Salaam and spent a very pleasant weekend in Zanzibar.  He is a gentle soul, very good company and his conversation rambles around a million topics in an afternoon.  But as for the others we were working out each other’s characters, foibles and, worst of all, domestic habits.  Even in the best of environments, where you get on all the time and have a good laugh, the truth is that you are with these people 24/7.  And it does get claustrophobic.  In a place like Mauritius, which is a relatively benign community welcoming to strangers, there is no need to be constantly keeping watch on each other.  It does from time to time get a little stifling.

At first I did swim with Mike and the others, but as I say, I started to find going up and down the same pool with the mosquitoes biting at your shoulders every time you rested, a bit wearing.  I preferred to walk – a bit of exercise and a chance to explore the neighbourhood.

The compound in which our house sat was right on the coast; there was a low fence beyond the swimming pool, and through a gate you could access a large expanse of rocky pools.  The view from here was enchanting.  Mauritius has a fringing reef with a few small islets of significance, but there are no really substantial sister islands – the second island of the nation, Rodrigues, is over 200km away to the east; well over the horizon.  Only to the north are there a number of islands beyond the reef, and we could see several of these from our beach.  Round Island is one.  Mike scoffed that this was a misnomer, the shape of the island was like an inverted comma on the map.  But I gave him some logic back to stop that scoffing.  Round Island was named during an era when there were ships but no aeroplanes.  No explorer would have seen the island from above in that era; they would observe it side on, and from a distance it looked like a perfect semicircle.  It rose steeply from the sea to a bulging plateau on top.  Bound to look “round” from the side.  Mike would not climb down on this one but I think he grudgingly accepted my reasoning.  Behind Round Island was a smaller blob of land, Serpent Island, and to the left and much closer to us was Flat Island.  Again some may say this was a misnomer, but although not at sea level, much of the island was at the same altitude, hence flat.  And to the left of there, only visible by heading out to the rocks where the lagoonal tide lapped, you could see Coin de Mire or Gunner’s Coin.  A gunner’s coin is the carriage in which a cannon or other gun can be placed.  If you look out from the mainland this island’s profile perfectly matches the sculpted shape of a gun carriage.  Again if the early explorers had been in balloons they may have called it butterfish island – a bit fat central blob with two floppy fins either side.  But they weren’t so they didn’t. 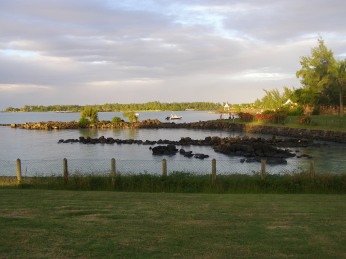 The little bay at Calodyne

The hotel next door

Wildlife on the rocks

The team leader, Mike, had rented up a project house in Calodyne, a small village in the north east corner of the island so he could be away from the hustle and bustle of Port Louis.  He was attracted to a pleasant modern 3 bedroom house in a gated community, mainly because at the coastal end of the plot was a large kidney shaped swimming pool.  Mike had trouble with his knees and swimming was the only heavy duty exercise he was really capable of.  I loved to walk, and it did not matter where I went as long as I got out and saw the world.  I did use the pool a few times but am not a massively confident swimmer and what is more, plodding up and down the pool after work when the sun was going down and the mosquitoes were coming up, was not especially appealing. 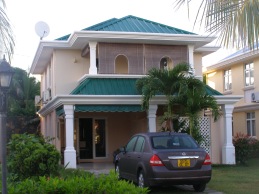 Our modern but comfortable base 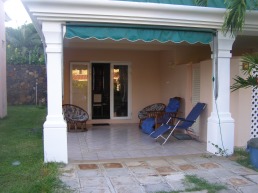 The car port where we spent most of our time

The house’s ground floor was predominantly a large open plan dining room/living room where, apart from meals on a cold evening, we did not spend much time.  Mike and a couple others from the project team were smokers and had set up seats in the car port to keep the smoke out of the house, and we naturally gravitated out here to share a few beers and talk after work.  The car port was open – we actually parked the car down the driveway – and during the day was pleasant shade against the tropical sun, in the evenings a bit of shelter from the onshore winds.  To the left of the car port was an open space to hang washing behind which was small but well kitted kitchen, and upstairs a couple of bathrooms and three bedrooms.

But it was the car port that held our attention.  We all got up in dribs and drabs and made our own breakfasts.  I needed plenty of bran in the morning.  The Mauritian food tended towards its French influence which meant there was a lot of bread and pastries around and I needed something to offset all that stodge.  Mike would have a croissant or two, the others pleased themselves.  We’d brew up coffee or tea to taste then sit in the comfy chairs out front and watch the world warm up.

If we lunched in, the same would happen – it was just a shame to be indoors in such a climate but with no deck or veranda this little square of tiling was the best we could do.  Conversations were varied, usually starting with the team letting off steam over what had happened on the project that day.  Once that was done we could talk politics, culture, arts, occasionally sport.  We were all very different with varied backgrounds and taste, but we could generally find something to pass the time away.  Mike was often vociferous when he had taken a glass of wine or a beer, and this gave an excuse for the rest of us were happy to sit back and let him ramble.