An impromptu market spring up on the shore as several of the big mammas who were catching the fish in their bowls were passing them on to others on the shore lines.  It was not clear but it looked like several of these women were managing the sales of the fishermen and ensuring that they got their cut even though many were still out in their boats.  But there was the odd opportunistic guy who dipped a single bucket into the water to get enough food for his week.

The concentration of fish in this little area had caught the attention of much of the bird life in the environs and they were swooping in on the catch, or  stealing the odd fish from the periphery of the market place.  Some of the fish were being cleaned right on the beach there and the entrails were picked up by birds and by the lucky crabs who lived just where we were standing.

We watched for a while as the final stragglers of the catch were brought up and the remaining net tidied up into one huge pile ready to be loaded on to a cart and taken back to the village to be repaired and prepared for the next haul.

We bade our farewells to this village, privileged to have been included in a huge community ritual and started to walk back to our resort.  At this point I realised just how far we had travelled and it took over 30 minutes to get back.  We’d been away a couple of hours but it did not seem to bother the rest of the group who had been reading, drinking and doing a bit of pottering of their own.

The tide was completely out now and only a trickle came from the lagoons and the river.  Laziness had taken over the whole world, whether it was the sun, the beer or the palm wine.  Kids who had been playing now leant on a nearby wall and said a seldom word to each other.  Dogs had half buried themselves in the sand to cool down and probably relieve the tics or fleas.  The sun was setting over the ocean and turned the bay a distinct purple grey hue.  Reluctantly we packed up our belongings and headed back to Freetown and work.

I am rarely able to sit still for very long and within an hour of lunch I wanted to explore.  Jan said he would join me; he could do with a walk.  We waded across the river which was now hardly more than the trickle of water and we walked across a mass expanse of flat sand to reach the dunes.  We could see they sat atop a long spit of land, and from where our little river broke into the Atlantic, there spread about 5 kilometres of flat hard beach sand.  We were up for exercise following our long lazy lunch and we set off at a pace.  We passed plenty of other tourists from Franco’s for a while doing something similar but he further we walked the more we met just locals; some kids playing away from the village, the odd fisherman who was checking a boat moored up on the beach.  Off in the distance we saw a huge amount of activity both on the beach and in the water.  It became obvious as we came closer that a whole village had come out in the late afternoon and the fishermen had let out a massive net in a semi circle from the beach.  Several boats were out in the deep keeping an eye on the net which was kept in position by a number of floats.  One boat was holding the far end of the net in position close to the edge of the beach.  A second boat that was  letting out the net was drawing close in to the beach about a 100 m from the first and several men from the beach dashed into the water and grabbed hold of the net.  At this point they arranged themselves on the beach in a line and started to haul the net in.  About thirty people pulled like in a tug of war and dragged the net about half way up the beach.  The man pulling at the back would release his grip on the net, and while some people behind him were folding the net neatly on the beach, the man ran to the water again and took up a new position at the front.  Jan and I watched for a while until people realised we were standing there and smiled.  Jan was a keen photographer and started to take some snaps.  I was invited to help haul in the net so I took my position up near the front and started to pull.  It was horribly hard work.  The net was already heavy but it was loaded down with sea water and some bric a brac – even the occasional fish caught in the string.  But the net, called a seine, was gradually tightening – the semi circle growing smaller and the boats out in the water were checking that it was not losing its grip on the bottom and letting fish escape.  Such a clever simple system – floats on the top to keep the fish from escaping over it, weights on the bottom to stop them from scrabbling underneath, and all the time we pulled the net hand over hand the net tightens and the fish herded closer and closer together.

We had one last stop that day.  To the north of Samfya was a resort hotel and we had seen from the main road that it sat above sand dunes.  We decided to investigate further and took a turning off the tarmac just at the entrance to the town.  We surfed over the crest of these dunes and dropped under the hotel to a beach bar.   The sand was whiter than by our own hotel; you could have been in the Caribbean.  A guy was sweeping the sand clear of detritus from the nearby trees, preparing the beach for weekend trippers and locals.  I’m not sure I wanted to enter the lake myself as there were a few water snail shells around and I was not keen on contracting bilharzia.  But the scene was alluringly beautiful and surreal.  This beach was the westernmost point of the open water of Lake Bangweulu and lakewashed sand from the rest of the basin must be blown here on prevailing easterly winds, particularly in the dry season when the lake is low and sediment exposed.  Over the years the sand has been whipped up into 20m dunes as if you were on the coast or desert plains.

These bizarre natural phenomena in amongst the marshland and rolling agricultural land are not protected though, and sand is a valuable building commodity, so it is no surprise that the leeward side of the dunes are being excavated at an alarming rate.  But the beachside has an elegant beauty all of its own. 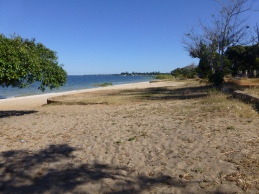