One other noise occasionally broke the tree frogs’ chorus; a loud caterwauling, indeed like a cat having an argument with a neighbour.  Scriber pointed a finger skyward “the mountain chicken”.  He had a slot on his field datasheet to record this, positive contact but without a sighting.  Although we could get some idea of the direction of the call – the terrain and the complexity of the forest meant we could not find the actual callers themselves.

We heard several mountain chicken calling across the valley to each other, but we did not see any amphibians save these tree frogs.  I was rather disappointed.  My time on Montserrat was limited and there was no chance of another evening transect while I was on island.  Scriber was also disappointed for me and said “We’ll go over to another transect where I know we shall find one”.  We carefully picked out return route to the vehicle and headed along the main road past the top of Brades and the airport and over to the east coast.  Although the road zigzags in much the same fashion as on the leeward side of the island, there is little habitation.  The road used to head all the way down to Plymouth past several villages and the old airport, but this northern section, being on the more exposed windward side of the island, had barely been developed save for the odd quarry.  We parked up and headed up into the Centre Hills for the second time that evening. 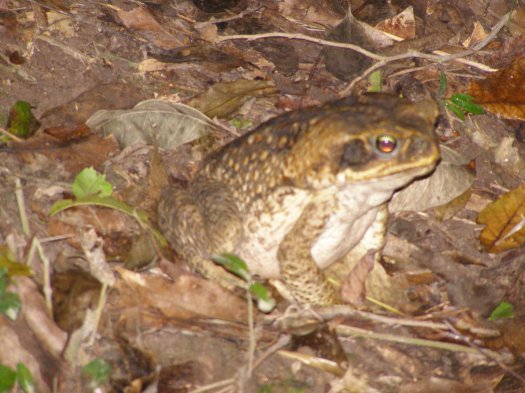 Not a Mountain Chicken – but what is it?

While I was walking I asked Scriber how he got his name.  It turned out that he had a second job.  He was a poet and a writer as well as a conservation officer and tour guide.  He’d been told at school that he seemed to have a talent for making complicated things simple and he was a “Describer” which became in this modified form, his nickname.  He’d got into the habit of writing some of his descriptions down and was quite a legend amongst the local community.  Over the course of the time I was in Montserrat he told me a few about the turtles and the national bird, the Oriole.  But it was still mountain chickens I was hunting here.