My week on Montserrat was busy – I had to meet the various teams of environment department workers who were responsible for the different biodiversity programmes.  I was to meet an old friend of mine, Laverne, who almost single handedly had introduced and fostered use of GIS on Montserrat.  And I wanted to get a grip on the species I was looking at.

The biodiversity action plan was to focus on endemic species in the Central Hills.  My colleagues from Kew Gardens were getting a good handle on the plant species – had conducted transects across the hills and were finding new species almost all the time.  I had a quick job to manipulate their existing data into a format that could be transferred to their master database in London.  There was a guy called Steve who I started referring to as the batman; he was crazy about bats and had a complicated way of recording all his information.  The island conservation team more or less let him get on with it.  Bats are one of the few land mammals in the Caribbean that are endemic – given the chain reaches out in the ocean there are not many other ways to extend your species’ range unless you fly.  The result is that there are several endemic species and subspecies of bats in all the islands and Montserrat is no exception. I chatted with the batman a couple of times by email  but there did not seem much point in changing the way he did things for the sake of local conditions.

Then there were the birds.  I worked with Geoff from RSPB to decide how we would best tackle this.  I showed him the seabird databases I had developed in the South Atlantic, but we agreed this was a different case.  Here they were not trying to count every bird on a rocky outcrop, but to try and sample some shy species in forest undergrowth; most notably the Montserrat Oriole whose numbers had declined sharply after the eruptions. 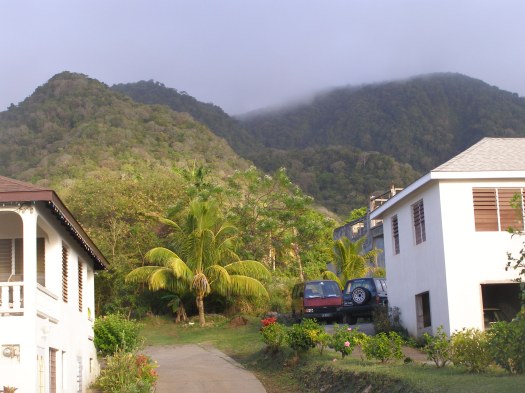 The Centre Hills from our village

The two other species of interest were different.  The first was an enigma.  It was like hunting the snark, like the blind man in the dark room looking for the black cat …. that isn’t there.  It was the Montserrat galliwasp.  A galliwasp is not, as you might imagine, a kind of insect, but a lizard.  For a smooth lizard it is slightly flattened, wide bodied even.  My description is all from books.  I didn’t see a galliwasp in the week I was there.  In fact it had been several years since anyone had seen a galliwasp.  The last time had been about five years ago and the poor creature in questions was in the jaws of a small dog so was not going to do anything to relieve its critically endangered species status.

So I designed a database that was to do a couple of things; one was allow anyone to log reports of people seeing a galliwasp – whether being eaten or not at the time.  The second was that a series of remarkably complex study sites were being set up to see if they could attract galliwasps in to be studied.  I never saw one of these sites themselves but it was described to me in great detail.  They sliced up the site into segments of long grass and short grass, corrugated iron they could hide under, scrubby vegetation.  I was to create a complex database that would describe all the habitats and the number of galliwasps of what sex, age, length and height.  All this for something which had not been seen alive for a generation.