I was off to Fintonia the next morning so did not engage more in that culture till I returned back the following weekend.  After defecating through a hole in concrete, bathing with buckets and itchy sweaty sleeping under a claustrophobic plastic mosquito net; the little project apartment at the foot of the tower block in the northern fringes of Wilberforce was like a 5 star hotel.  It had two main rooms, a kitchen diner and a lounge with TV, and two bedrooms off.  The main bedroom had a window out front and en suite bathroom and if I could, I would try and take that.  With other consultants coming through it was a case of first come, first served and more often than not I was put in the second bedroom.  This was at the back of the main living room and built into the hillside, so there were no outside windows for light, ventilation or view.  Worse, it had a small window which opened onto the living room itself, so if others were in the house and using the living room the light and noise came through.  Still, I was usually too tired from the work and the heat to care and slept well whichever of the rooms I ended up in. 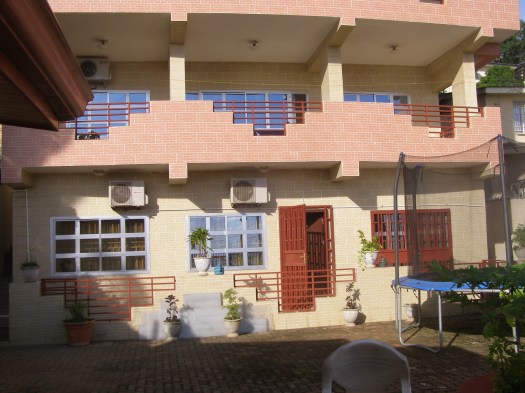 On the floor above, our project manager, Jan, lived in a spacious apartment with a proper balcony and plenty of room; as it was up from mine, there was more distance from the front of the block to the hill behind.  We did not tend to socialise a huge amount the first time I was there, but now the weather was out I often could hear his music when I came out the front and we talked a lot more.  He’d started exploring Freetown of a weekend and he asked if I would like to join him on some trips.  I jumped at the chance.  The GIS colleague with whom I was most closely working, Kofi, had taken me out a couple of times but he was not much of an explorer.  He would take me to a restaurant (usually Chinese) or maybe go shopping.  Once in the wet season I had persuaded him to take me down the coast but the road was one of those being upgraded by the Chinese and once beyond the city limits we had to traverse many road works, holes in the ground, ruts in the road, and muddy pools of water.  We had gone south about 20 km when the road degraded further, the weather had closed in and we could see only a hundred metres ahead.  It had not been pleasant and Kofi turned the vehicle round and came back.  I think it put him off any idea of exploring with me any further.

I suppose Kofi had been concerned about his car.  He had been given a project vehicle by our employees for the two year duration he was to be resident in Freetown.  It had taken a while to get it to him as it was bought in his home country of Ghana and they had to arrange one of the project drivers to fly to Accra then drive the vehicle back through Ivory Coast and Guinea to Freetown.  This had meant a mountain of paperwork which seems to be an essential requirement in West Africa to cover insurance, passport needs, customs claims and laissiez passer, or a carnet to allow passage.  Kofi was very careful with this vehicle as he knew it would be the only one he was allowed.  Having put up with taxis and drivers for the first couple of months, his freedom from having his own vehicle was therefore immense.  He could choose when he arrived and left the office; he could shop and travel around at the weekend easily.  So he was not keen on taking it out on the open road for a jolly.  Although it could just about cope with the neglected streets of Freetown, it was not rugged enough to cope with the rural routes.