We stopped work well before lunch time – mainly as the heat of the day was too much to be out walking the fields with a GPS.  Kofi and I would return to our house to find a big hot steaming meal of rice and either goat or chicken sitting there.  I’d take some for calorie sake but it really was not my lunchtime habit to eat a big meal at home, let alone in the tropics.  Both of us usually had a siesta after this; I would lie on my bed and listen to the background village noises or the expansion of the roof in the afternoon sun.

We reconvened with our guys about 3pm and had a couple more hours, but we soon gave up this practice.  Kofi had been dealing with the per diems for these guys and he gave daily handouts of Leone to them, which they immediately would spend on palm wine.  I never tasted the palm wine in Sierra Leone; I had heard just how rough and badly made it could be.  It was the stock local drink out in Fintonia where getting a cold beer was nigh on impossible, but its potency and the warm afternoon weather meant that our three trainees were not able to concentrate in our second sessions.  This was also where the problems arose.  We had been very careful that we might cause some problems in the community; the idea of people using high tech yellow machinery going round people’s fields and backyards was bound to cause some gossip and controversy, and we had all our messaging ready to help explain our purpose and how Fintonia was potentially helping us define a new protocol that could help villagers across Guinea and Sierra Leone.  For the most part people were very accepting of this.  We even were able to explain about the possible disputes between neighbours and say all we were doing was defining where those disputes were and not resolve them ourselves. 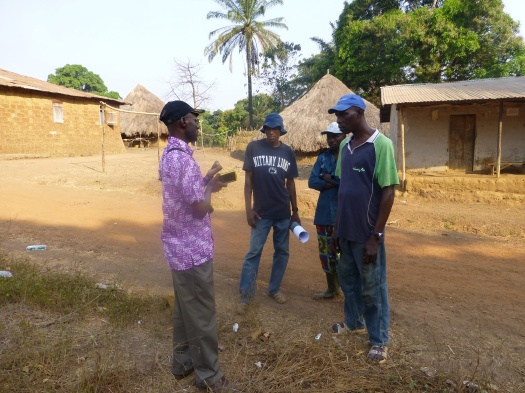 Concentration levels in the afternoon not so good

No, that was not where our problems lay; it is always the trivialities which are there to upset.  What concerned the villagers and became rampant gossip was more how these three were hanging round with us and getting drinking money.  It seemed unfair.  Of course we had not played any part in the selection process and we had to have quiet words with the guys about not flashing the cash around in the afternoons (hopefully meaning they would not get drunk as well) and to avoid having these arguments.