In village after village we saw the red crosses and steadily increasing numbers on the houses – I seem to remember it got to over 500. North of Kamakwie it was only a long term plan to widen the road, but instead we got evidence of another change that had occurred since my last visit.  Near the ferry across the Little Scarcies River, there was a massive truck piled high with thick tree trunks.  The driver was being assisted by a couple of others to load more massive timber in the vehicle… he was planning to drive it back towards Freetown that evening.  I’d seen parts of the road had deteriorated even further from what I remember already.  I speculated what more damage this vehicle would do.  I also wondered how these huge trucks got through the occasional drains, or crossed the strange little bridges that were frequent along the northern section of the road.  They were basically a large tube covered in a square of concrete.  I think at one time the top of the block would be level with the road, but the road either side tended to erode away, and vehicles had to bump their way up on to these bridges and bounce down the other side.  Not so bad in a light 4WD but a nightmare for a heavily laden lorry.

These lorries had not been going up and down this route last time I had been here, but the government had reversed a policy that allowed logging concessions in the forest.  This was not good news for our project.  We were trying to find ways to work with the communities to conserve and regenerate the remaining precious Guinea Forest.  Our work was slow and incremental.  Compared to the loggers who came in with their chainsaws and heavy machinery could clear the best and most precious gallery forest for these gigantic logs a million times faster than our efforts to regrow trees.  It was quite depressing to see before we had even reached Fintonia to start out own work. 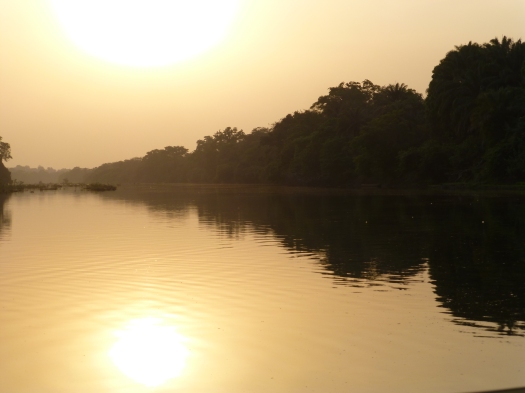 Sunset on the Scarcies River 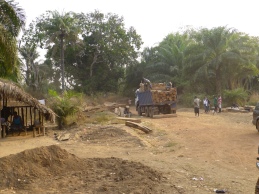 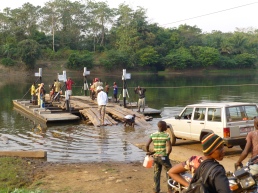 Busy scenes at the ferry

It was sunset as we got on the river bank and the serene atmosphere calmed the spirits; we waited for the ferry to come over from the north bank, with a ancient blue tractor aboard.