And so to work.  Another busy morning started with a meeting in the STEWARD office just opposite the guest house.  Then we travelled a few kilometres up to a new school.  A large number of guests had been invited in to get the formalities achieved as efficiently as possible.  This included chiefs, politicians, representatives from various farmers organisations and a few others.  In many senses this trip was a launch in the field of the third phase of STEWARD’s work in the region and it was vital to sensitise and observe due respect for the key decision makers in the region.  Without their support nothing was going to happen.

Across the large trial plots

Well in the centre of the plot 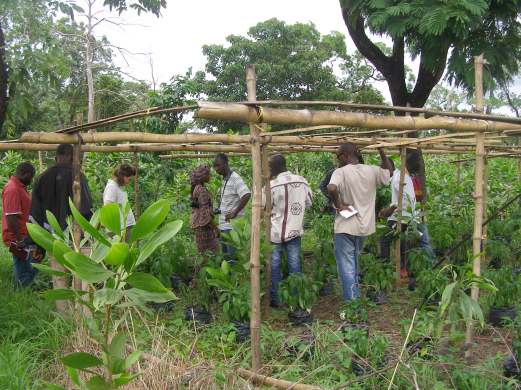 Everyone introduced themselves and I surprised a few of my colleagues that I could muster enough French to apologise to them how bad my French was and that I was ” géographe qui travaille avec le teledetection et les Systems Information Geographique” .  Slightly sweating I sat down again and hoped no one would ask me to speak again.

The next part of the morning was spent at one of STEWARD’s activities from past phases; a large development plot on a hillside outside Madina Oula.  Several hectares had been hedged in and different organisations were working on improving the ground and making demonstration sites to teach farmers new techniques.  There was plenty of scrubby space up here for expansion, but there was still a lot going on, as we were treated to orchards, beehives, fruit shrubs, tree nursery,  bananas, crops, and goats, pigs and cattle.  At each part of the compound we met up with various collectives, including a very enterprising women’s group that was developing their own ventures up here.  We inspected their plots, the wells, the trees and animals, even the compost heaps.  I absorbed it all; I am fascinated when people want to impart their specialisms on you, and whatever I could retain could be useful for Kofi and my work when we returned to Freetown; helping people map the activities out here, and do spatial analysis and comparisons with other data.

As we were making to leave, a middle aged farmer in navy blue overalls who had been following us around the plot invited us to cross the road to his own fields. He took a lot of pride in showing what amounted to a miniature version of the official demonstration plots.  He had a set of small trees in plastic packaging ready to be planted out; he was multicropping to reduce pests and diseases, he composted and manured, he had a kind of drip irrigation system.  This was extension in practice and it might only be a little win for STEWARD, but it was encouraging to see it happening.