Next morning I felt sticky and dirty and decided I must shower.  It was a slightly cool morning for the tropics, late night rain was now steaming from every surface and the grey cloud above us made the scene rather miserable.  I filled a bucket from the containers which in turn had been filled up by the local STEWARD staff the evening before, and took my washkit, microtowel and water down to the “bathroom”.

In theory this was no problem; I’ve bathed in several of these open rooms before, but this one was in amongst the houses of the town, and the grass fence was made for Guineans who were shorter than I.  I am no giant, but my chest was above the top of the fence, and I drew quite a lot of attention from the people around as they didn’t often see such an amount of pale skin.  It was worth showing it off as afterwards I did feel better for dousing myself in cold water and becoming at least a little more fragrant than the night before.

We breakfasted back at the Guesthouse, and one of the USFS colleagues, Susan, showed us her roomy for the night.  In the top corner of her bedroom was the most enormous spider, not just long legged but with substantial bulk.  I’d have been happy to have a buddy like that in my room, the number of flies that had been buzzing around. 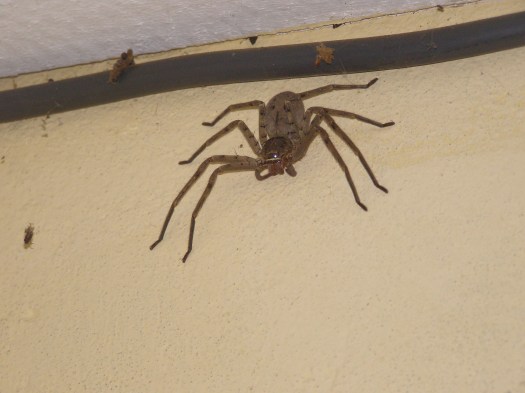