It was a long drive to Sanya, and I noted that the road itself was of poorer quality once we left Sumata.  The rain had also started to fall.  With the steam on the inside and the drops on the window, there was not a lot to see, but at least we were lucky to be in the dry.  We passed by people huddling under the trees, or just walking along in the rain by the road, trying to avoid our splashes as we went past.  At one point the convoy came to a complete halt; up ahead was a medium sized bridge – it was two metal girders over two concrete posts crossing a ravine of some 7-8 metres deep.  The general structure seemed sound enough but there were some concerns about the wooden planks over the top.  The ones perpendicular to the road were in various states of decay; and overlain there were planks along the road to line up with our tyres, but one section of these were missing completely.  We were not entirely certain that the planks were nailed together properly and with the weight of the vehicles plus luggage and passengers, we were wondering how much shifting of the planks would occur, potentially destabilising the whole structure and sending us toppling off into the ravine. 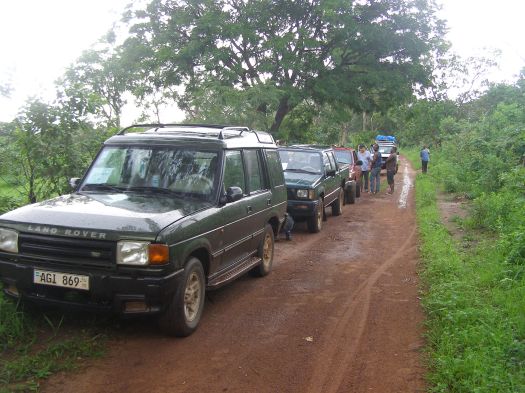 The gloom deepens as we approach the border

Clearly we were not the only ones that were concerned about the bridge.  To the left of the road, down a steep rocky incline, was a second track, down to the dry river bed and back up an easier slope.  One by one the 4x4s negotiated this slippy hill and we went on along the track on the far side.

The rain began to clear, but our rental drivers were again inexperienced in dealing with the now muddy road and Haba had jumped way ahead.  We caught up with them at a point, where for both men and women was a useful relief stop, and I finally got a few moments to look around.  The terrain was changing.  In the east, a sheer cliff of sandstone rising over 1000ft to a plateau.  Gray confirmed this was the Kuru Hills.  Where we were now was a more open woody savannah, more grassy areas in between the tree stands than in Fintonia.  We dropped down over the next few miles to Sanya village.  Although the weather was gloomy, it only added to a feeling of decay in Sanya.  Yes the same mould and moss was all over the houses as elsewhere an everywhere looked muddy, but more of the houses were in poor repair.