However it was time to get back on the road and away from this little oasis.  We thanked our guides and drove out on the road.  Lunch was La Vache Qui Rit on  crackers en route; not my favourite food but so enthused on by Jean Luc that I could not refuse.  We still headed westwards and apart from one town where a market had spilled out so far in to the road (to allow maximum hawking for any passing vehicles) we made reasonable progress.  But dark clouds were gathering on the mountains to the south and the heat started to go out of the day.

We were due to meet the chairman of a local fisherfolk organisation on the main road but was having difficulty locating him.  Our government guides kept phoning him and he would tell us that he was standing by a tree.  Since there were hundreds of trees along the road side this did not help.  Eventually we worked out that we had gone past the spot and had to retrace our steps.  Eventually this small man emerged from the side of the road and flagged us down.  He climbed in to our already crowded 4×4 and we set off down a track between some smallholdings.  We met a couple of other villagers who followed us down the hill and out onto an open plain, grazed heavily by horses.  A few elegant trees gave this the appearance of a landscaped parkland, but this gave way to a rather muddy volcanic soil intermittently covered in grass. 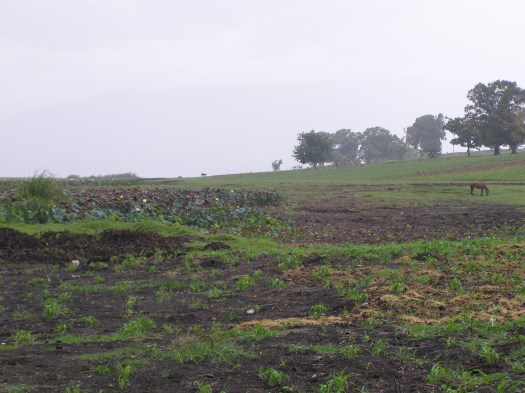 We got out the vehicles and looked across marshy vegetation at a huge open lake, black under the clouds, and behind the wall of mountain that was its catchment.  We could not see the whole lake from where we were and the plan was to take some small pirogues or small open boats out onto the water to inspect the cages.