“If all the aid money that were available for the Caribbean were given to Haiti, it still would not make a difference.”  I remember this statement from a DFID advisor in Barbados over drinks one night back when I was still working for NRI.  As a frequent island hopper, indeed then an island resident, I got a reputation as an easy life consultant – searching for the tourist destinations and modicums of poverty rather than tackling the really big development issues.  I felt it was completely untrue, and would point out the pockets of extreme poverty in some of the island nations I visited, and the fact that because of economies of scale and the need to set targets, they were ignored by aid agencies every time.

The Caribbean Islands were indeed much richer as a whole against most other regions of the world.  I once did a study which looked at all the human development and economic indicators and indices and I was shocked to see the huge per capita GDP of the Cayman Islands, for example, and most of the islands had respectable and in many cases fast growing economic situations, and their social indices were also good – the levels of literacy for example were amongst the best in the world.

And yet Haiti stuck out like  a sore thumb.  Consistently low human development index values, social indicators and in terms of economy; it was hard to see if it had one.

Why was Haiti so different from all the other Caribbean nations.  It’s modern history started out the same way as much of the region, with first Columbus then other Spanish explorers, followed by Dutch and French settlers.  It was exploited by commercial companies, like other islands, it has an agricultural system made profitable by a system of slavery, like other islands, and was the basis of European empire building conflicts, just like other islands.  Then, stimulated by the French revolution in the land of the colonial masters, the Haitian slaves rebelled and were quashed.  With the Napoleonic wars, the French army were often distracted in many theatres, and eventually the strong willed Haitians took control of the western part of Hispaniola.

So in theory the oldest free black republic in the Western Hemisphere should have built on its early fire but as with many revolutionary pacts, unity comes from having a common enemy.  Once removed, there were factions and strong minded individuals who ripped the new nation apart before it got a chance to build a firm foundation.  Coups and assassinations were frequent, and in the early 20th Century the USA, worried about instability in its backyard (Haiti is only a few hundred kilometres south east of Miami) took is on as a protectorate.  While infrastructure improved, the Haitians grievances grew with maltreatment and continued impoverishment.

After the USA released its grip, a succession of national presidents helped to fuel growing corruption, injustice and political chaos. From this emerged Papa Doc Duvalier; once ensconced his dictatorship  grew, growing corruption, growing intimidation of anything resembling opposition, horrendous stories of rape, voodoo acts, and pocketing of aid.  His son – Baby Doc Duvalier continued the tyranny, albeit somewhat more muted.  Although Baby Doc Duvalier was forced into exile, the subsequent years have been just as chaotic, with more coups and a culture of corruption and violence which has become engrained in the psyche of the country and its people over several generations. 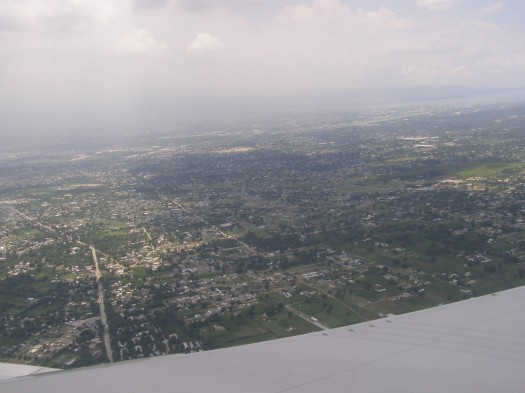 Landing into the crazy town