The Nile tilapia were another concern to some people; mainly outside conservationists.  Tilapia, or the Nile perch has become one of the most prodigiously fish farmed species in the world – as I was to find out in Haiti a month or two later.  Again the species had got into local waterways and was supremely adaptable.  It was swamping the Kafue swamp.  The conservationists felt they threatened the local ecosystem, forcing out other native species.  Ian again was more pragmatic – keep harvesting them and eat them.  Given their spread along the Kafue there was no point in arguing for strict control, and they produced a very valuable source of animal protein. This was a place where it was often difficult to rear enough livestock each year, and tilapia never needed fodder. 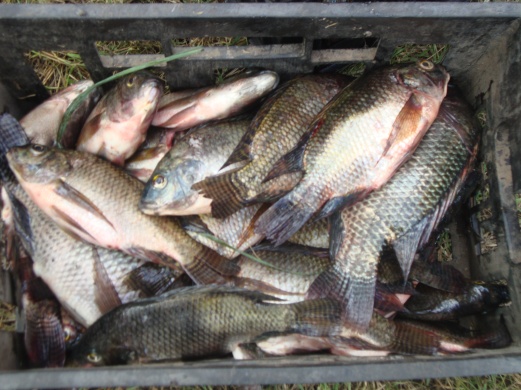 I must admit Nile tilapia is not my favourite fish.  Served up as Bream at restaurants; its ugly face is enough to put you off, but the main problem is the deboning.  I’m not the world’s best expert at getting the flesh of a fish’s bone, but tilapia are made worse by the fact it appears to have two layers of bones, the main spine and then a row of hard cartilage out of which come the fins.  The jaw bones complexity also makes me not go hunting for meat round there.  The consequence is that my plate looks like a disaster zone and lots of flaky bits of fishmeat are mashed up with a hundred tiny translucent bones.  Despite these difficulties, it is a staple in the flats and is highly marketable around Southern Africa as bream.

We took a look at various sizes of catch; Ian was impressed that some fish catches were sizeable.  The local fisheries officers were collating the amounts of fish and market prices sampling for their records and they showed us the data sheets; but again the data were not being collated anywhere and never analysed .

We dug deeper into the crowd to see if there was anything else of interest, and I spotted a large pile of catfish on the grass.  These fish – like long thick bodied eels with evil looking whiskers that give the animal its name – weighed several  kilos each.