Undeterred, the following day we had another meeting scheduled not far from Lochinvar.  We headed back down the same route, swiftly collected the local fisheries officers and went on to the same wooded island.  The guys were there, but so were about 100 other people.  The hard gravelly area next to the lake that had been so deserted on the Sunday was now thronging with activity.  As we approached from the road side, we saw many women in their multicoloured wraps dealing with bags tightly packed and sealed.  Four trucks were fully loaded, and there was also a small minibus waiting at the site.  While we were there more trucks arrived.  They came filled with items such as washing up bowls, clothes, utensils, gear for fishing.  These were offloaded and transported to a wide array of boats, small dugout canoes, larger pirogues and other craft to be sold and carried off to the villages in the middle of the swamp inaccessible by road.  In turn those boats had carried a wide array of fish, some already packed up in the huge bags we had seen the women haggling over, others still in open bags and some just grouped together and held with wire or string. 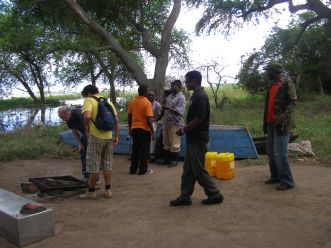 Back at the landing stage 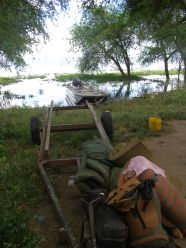 A boat is ready this time

But the villagers are here

Brought ashore from across the swamp

The fish bags came in two sorts, one was filled to the brim with sundried fish, but tightly packed to prevent flies getting in and some of the smell getting out!  The others were crates that were even more substantial.  Ice had been carried down from the towns on the trucks and fresh fish were packed in to the ice crates.  They were often surrounded by insulating cardboard and pressed between wooden grills lashed together by ropes.  It gave the impression more of cotton bales than fish, but the quantities were immense.