The next day, Jeremy and I worked with SHOALS to show them how to survey the marine resources.  We met them at their shed in Port Mathurin and drove back close to Cotton Bay where we hooked up with a fisherman who was to provide his boat to look at the northern part of our area.  He had arrived on his moped to meet us and continued to wear his helmet while he readied out boat.  His little blue pirogue contained two SHOALS guys, a couple of students from the University of Mauritius, Jeremy, myself and this little man in his helmet.  We managed to work around the choppy Baie De L’Est for about half an hour, then the outboard motor gave out.  As we drifted towards some ominous rocks the captain pulled out an oar and dug deep down.  He found some purchase and pushed us back.  There was no way we could continue our survey under these conditions so suffered the ignominy of being punted back to our port of embarkation.

Choppy but so shallow

Pushing back to shore

Next day we travelled to Port Sud Est – a fairly sizeable community that relied on fishing in the lagoon and as a fairly high class residential area.  With another boat we were able to access the southern part of the pressure zone.  The problem was that the boat was over a kilometre from the main land.  The solution was provided by the nature of the lagoon; water is never that deep in Rodrigues so we started to wade.  And wade, and wade and wade and wade.  After about fifteen minutes we hauled ourselves into the boat, but the water was still only knee deep.  We managed to reach out across the lagoon very quickly and to be honest , it was pretty boring.  Yes it was crystal clear water and every natural habitat was amazing.  But there were no issues, it was a perfect, undisturbed natural environment.  Shh, don’t tell anyone, but Rodrigues was perfect.

Walking a mile out to our boat

Trying to get on board 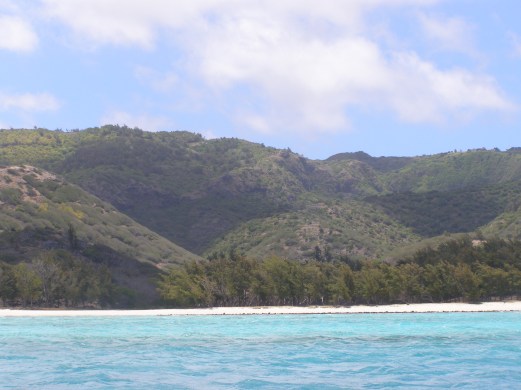 The stunning central hills of Rodrigues

Jeremy and I returned to Cotton Bay to report to Mike, who had had a busy day in Port Mathurin with the relevant agencies of the Rodrigues Regional Assembly.  He had also had a call from the Department of Environment staff wondering why I had been in the UK the week before, given I was supposed to spend the whole time in this country.  Mike had apparently put them straight, but the idea of quietly letting me visit my mum had dangerously backfired as it crossed this 90 day period limit.   As it was now sorted out, we spent a happy evening exchanging stories , sitting back in this tropical paradise and seeing how this was an example to the rest of Mauritius as to how to manage their coastal resources.  After several beers and a load of apocryphal stories, most of which both of my colleagues had already heard, I retired to bed, the windows open to let the Indian Ocean breezes in and the sound of the breaking waves send me to sleep.