Women were crying openly in the cabin; I was gripping the seat in front fiercely with my left hand while my right had tried to keep the book steady.  It had been a good life, I thought.

We came around once more.  The routine was now familiar – dark clouds punctuated by lightning, the navigation lights and pools of orange from the street lights below.  The sudden clearing of the skies revealing the airport hangars, terminal and runway. This third time was different as there was no inevitable throttle up as we headed into the sky.  Instead, before anyone had noticed we had bumped down on the ground and the brakes were applied.  We drew up quickly to a slow taxi, turned off the runway and were safe.  The rain was still pelting down outside but now looked innocuous.  We had to cross another couple of runways to reach the terminal.  As I looked out to my right I saw a line of lights of four other aircraft desperately trying to get down on the ground.  Our captain gave us his farewell message over the tannoy, using as nonchalant a set of clichés about “bit bumpy” and ” sorry for the slight delay”.  There was a twinge of nervous relief in his tone, but also pride as he told us we were the first plane to have landed at Oliver Tambo in the last 40 minutes.  Hence the stack of planes now trying to land on every available runway.

I looked at my watch as we continued to taxi past busy scenes of planes being loaded with passengers and freight, fuelled and watered ready for their journeys.  In theory my Virgin Atlantic flight  was due to depart in thirty minutes time.  I knew already that this was an impossible timetable.  If no planes had been able to land they would not be able to allow others to take off.  We parked up out on the airfield and dashed down the steps and onto buses.  I caught all the passengers exchanging glances and smirking with relief.  We’d not talked much, we may never meet again, but we had shared a big experience that evening.  When I got inside the terminal building it was crowded with people waiting for their delayed flights.  I was surprised to see my own London flight was not badly delayed and we would be boarding in about 20 minutes.  In a way I was grateful for the slick transfer.  If I had sat around the terminal for much longer I may have had too much time to think about whether to ever fly again in my life.

My fellow passengers were all aware of the hassle and delays caused by the bad weather, but none of them had the same story I had.  I settled back and got myself comfy for the long haul back over Africa and Europe to home.  It was still lightning and rain outside but nowhere near as intense.  The wind remained strong as I could see the rain passing the floodlights horizontally.  But a fully loaded 747 at full throttle is more than a match for a headwind and after a few bumpy moments as we passed through the cloud, the storm gave us no further trouble and I was away. 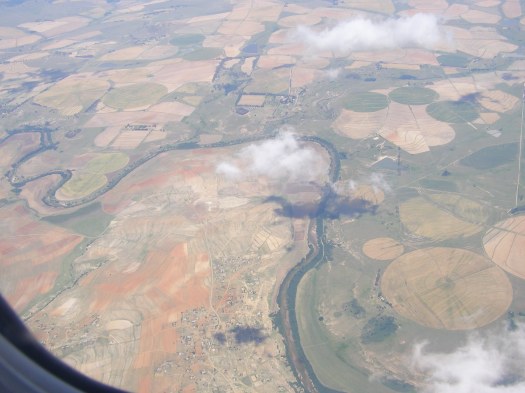