This was not the first endemic animal I had seen in Mauritius.  When we had been on the grassy bank on the other side of the gorge, we had spotted a small bird of prey sitting on a dead tree trunk not 30m away.  It was a Mauritian kestrel, smaller than the ones I am used to in Europe.  Dwarfism is peculiar in a way – many of the birds which become endemic in a small island have a tendency to be larger; the pink pigeon is a good example.  And the dodo was another. 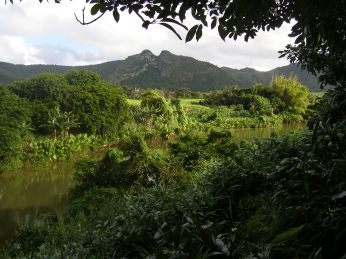 So different a view from the usual

In the Black River Gorge

on the crowded island there are still possible hiding places….. but it is not to be

A lot is written about the dodo as a prime example of a very special creature becoming extinct.  What I did not realise was that it is supposed that the dodo was just another pigeon at one time, but lack of predators and a pretty good life had meant it had evolved into a very large flightless walker.  All the evidence says it was made extinct early on in Mauritius’ colonisation.  But I kept looking up at some of the mountain bluffs and looking at the isolated well wooded clefts and wondered if up there was a small community of dodos hiding away from man.  Of course it was baloney.  Even if man could not reach them, the aggressive species we introduced including the rats, tenrecs and cane dogs would have feasted off any eggs a long time ago.  I did see two dodos though while I was in Mauritius.  One was the celebrated stuffed one in the National History Museum.  This slightly decaying building was only a step away from my office in central Port Louis and I thought one lunch time I should take a look around.  The second was a wooden carving in Eureka plantation house.  Their curious shape, the pot belly covered in feathers, the long fat neck and the huge beak, was mesmerizing – how could such a creature have ever evolved.  And I tried to imagine what it would be like to come across a family bathing in a small river, or waddling across one of these glades.  Of course, it was not to be. 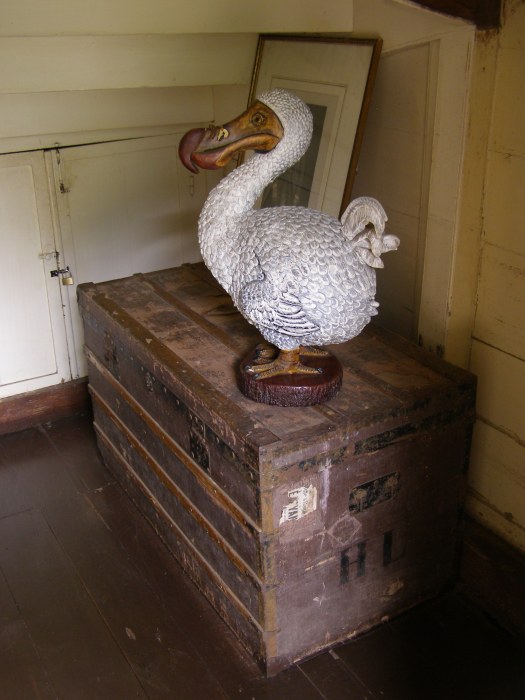 One thought on “The Other Mauritius – Dead as a national emblem”