There was something about this area we lived in that was cut off from the rest of Mauritius.  If you took the main road you had to pass through Port Louis.  Apart from at night or early on a Sunday morning, this road was chock-a-block with traffic.  If we were lucky going into work we would get past Pamplemousses (ever heard of this town named after the French word for Grapefruit?) which was half way, and on to the dual carriageway section.  If we were unlucky we would come to our first queue barely ten minutes after leaving the house.  The police were out in force at every roundabout trying to control the traffic.  The problem was that the innumerable little settlements left and right of the main road fed in at each junction, building up the traffic volumes all the way into town.  We were the lucky ones though; the much larger populations to the south coming in to Port Louis similarly had one road to get in.  They set up tidal traffic flows; a road worker would take his life in his hands as he paid out cones behind a pickup truck to close off one lane out of town each day so that people coming in to town could use it instead.  But the problem was whatever happened, from south or north, all of the traffic had to pass through a few roundabouts and traffic lights where they wanted to turn into the city centre itself – it took ages for you to make progress at these points, and this backed up the traffic way out of town. 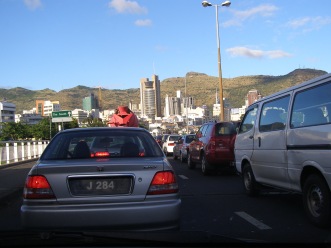 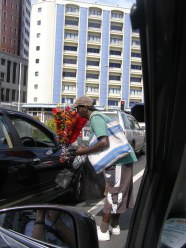 At least the vendors had a captive audience

If only they had left the railway intact.  At one time a series of railway lines headed out from the centre of Port Louis to the cane fields and beyond.  A line chuffed up the steep incline into the most populated part of the island; the towns of Plaines Wilhelm.  The route is still there, but in places new roads have taken it over.  It also often passed through the centre of the towns along the streets themselves and, even though in some cases the rails still exist, the thought of having trains fight through the traffic, the market places and the hordes of people is too much to bear.  However, if it had been planned properly a fast efficient light rapid transit linking up the main towns from Curepipe in the south to Port Louis and beyond in the north could ameliorate a significant chunk of the congestion the island now suffers.  After many years a bypass around Port Louis has now been constructed; it will be interesting to see how long this acts as a relief road and whether it will end up yet another congested thoroughfare.