Another peak to conquer was a huge block of hillside called the Barn.  One of the main reasons St Helena always looked bigger than it actually was came down to the presence of the Barn in the north east corner.  It was not especially high, but from a distance seemed to be a cuboid shape with impossibly steep sides.  It blocked out the sea beyond from any point and you could easily be deceived that there was more land beyond.  Sitting atop was a small pimple of a hill called the Haystack and was the final destination of one of the most ambitious walks I did. 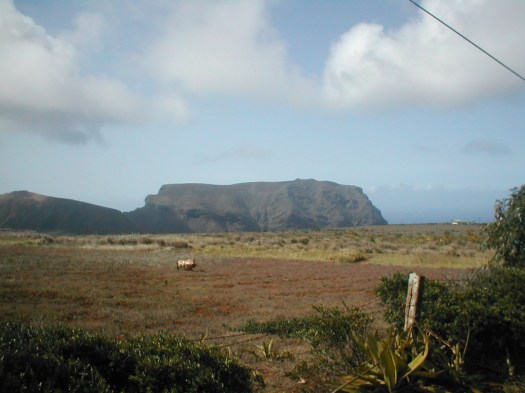 The Barn from Millennium Forest

The walk started gently enough from Deadwood Plain.  Parked up on the grass we hiked enthusiastically across the grasslands, stopping to watch the odd wirebird en route.  We passed over a stile at the far end and the terrain became a little rougher.  You could see how the outer parts of the island had been denuded by overgrazing in the past.  Goats had stripped the vegetation down, leaving the soil exposed to the stiff Atlantic winds.  Once the topsoil was gone the rain scratched away at the sub soil, which formed little rills, that had now turned into deep gullies that continued to bight into these areas.  While efforts were being made to replant in some places, and the feral goats had been brought under control by extensive shooting forays, the damage was so extensive that wastelands were a very good description.

The coloured earth’s of the crown wastelands below Longwood

We had turned off a path I had chanced on my own when I had walked to Flagstaff Hill; now we turned right and went along a windy ridge. It gave us amazing views back across to Longwood and into the centre of the island, although there was a little cloud cover obscuring Diana’s Peaks themselves.  We crossed an area of wasteland here, walking on bare hardened sub soil the various minerals in the soil producing a rainbow of dramatic colours but you could see the damage from the erosion clearly. The ridge was high but the walking was easy as we were below the ridge top and protected from the worst of the wind.  However, the way forward to our destination looked precarious.  The ridge became more pointed and it steepened on the landward side, but dropped away even more precipitously on the seaward side to the crashing waves below.  In some places the pathway over to the Barn was barely a foot below the peak of the ridge.  The wind was blowing hard where we were standing – we would be fully exposed out in front.  And to add to the problems, I could not see any route up on to the Barn from the angle we were approaching.