How can you get out of here?  Side Path up the left, Ladder Hill Rd the other side.

Side Path itself was my favoured route out, despite the several hairpins. The other road, Ladder Hill Rd, was always a challenge.  You drove way up the Jamestown Valley, almost out of town, before a hairpin sent you up this steep incline clinging to the rockside and heading back to the bay.  It was a game of jeopardy with the cars coming down the hill as for most of the distance the road was one track, and on the left was a sheer rock wall with outcrops, loose rocks falling on to the road and some dangerous curves.  To the right was a wall just higher than the level of your car window then a sharp drop to the town’s buildings below.  At uneven intervals there were passing places.  Cars heading down the hill were obliged to stop in these and let uphill traffic pass.  The trick when descending was that while you were negotiating the vertigo inducing roadway in front of you, you had to pass glances down the hill to see if you could spot any upcoming traffic zipping around the curves below, then gauge which of the passing places in front of you to halt at and avoid precarious reversing.  Most times of day it was relatively easy to negotiate all these difficulties, but during peak hours you had a trail of vehicles one way or the other trying to fit into the spaces or wait high up the hill for a chance to get down.

There was one shorter way to get to Halfway Hill, but no car could do it.  Jacob’s Ladder is the longest single flight staircase in the world at 699 steps.  Starting at the road between the museum and church in town the incline varies a little; it is almost always as steep as you could bear, but it is a daunting length as you strain your neck to see if you can glimpse the top (you can’t).  I went up it once with Edsel.  Although my attitude was that this was going to be a slog ,it was still a mental as well as a physical challenge.  The view changes slowly as you rise up the side of Jamestown’s canyon, but after the first time you have taken the courage to cling on to the rails and turn around, avoiding the feeling you are going to trip up and cartwheel all the way to the bottom again, it seems like too much effort to keep looking at the same view, save for the buildings being a little smaller each time. 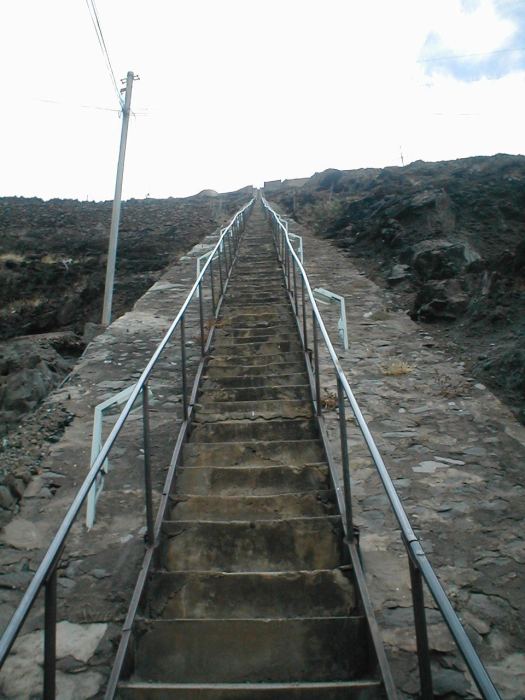 So you end up concentrating on the view ahead – the steps and rails in some places are not in good condition and you have to maintain your concentration and balance.  You follow the line of low level lighting  – looking like streetlights which have been buried up to their necks in the supporting concrete.  And the top never seems to get closer.  Edsel, with his heavy frame and sedentary lifestyle, found it a struggle.  I was glad when it looked like the end was nigh but as a cruel twist the slope gets steeper just as the fort on top of the hill looms into view, and the final twist of the dagger in the back is when you see all the cars coming up the hill with little effort and in less than five minutes while you have been sweating for fifteen minutes.  But at least I could say I had done it.  As I stood wobbling with fatigue at the head of the stairs watching Edsel struggling up the last 100 steps, I took in the vista once more, the whole of Jamestown stretching up the gorge and the light and cloud playing across the screes of the valley sides.  It was worth it. 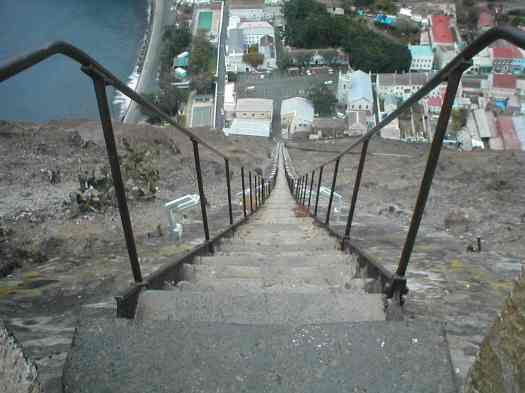 Of course when there is a challenge like the Jacob’s Ladder there are crazy people who will take it on.  The current record for getting from step 1 to step 699 is just over five minutes, so in theory could beat a car going up Ladder Hill Rd.  I saw one attempt on my final visit to St Helena.  Another of the Benjamin clan, Eric, was there with a stopwatch to officially time the attempt.  The runner was  a German consultant on the island, and he was built perfectly for the task ahead – the wiriness of a long distance runner but with solid thighs to get through the climbing too.  When the time came he stripped off his shirt and baseball cap, shook hands with Eric, limbered up one final time and took up a poise at the foot of the staircase.  Established at various stages on the way up were six people to help Eric take the split times, and at the top were a posse of people just visible from their popping heads when you stood away from the staircase.  Edsel and I were joined by about half a dozen people at the Jamestown end.  Eric counted down in a walkie talkie as another timekeeper was keeping track from the Ladder Hill end.  He raised his arm and sent Stefan on his way.  With his hands on his knees, Stefan powered up the initial hundred steps to the first split time – the girl there flung her arm in the air as he passed.  On and on he went – we all continued to stare at the diminishing figure heading upwards.  He did get slower and the last hundred steps were the worst as he hit the really steep part and the legs began to shout with pain.  By the time he reached the summit he was clambering up the stairs on all fours.  Without assistance he disappeared over the lip but then we saw the final checker throw their arm in the air, all the crowd there jumping up and down and the time was crackled down the walkie talkie to Eric. It was a new record at 5 minutes 17.46 seconds. 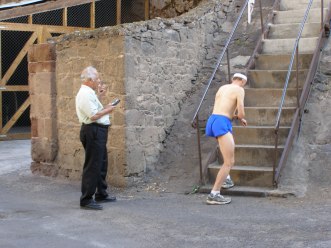 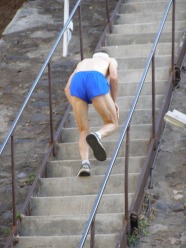 The split timers up the ladder 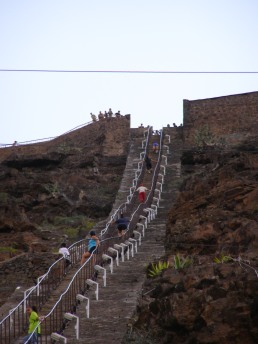 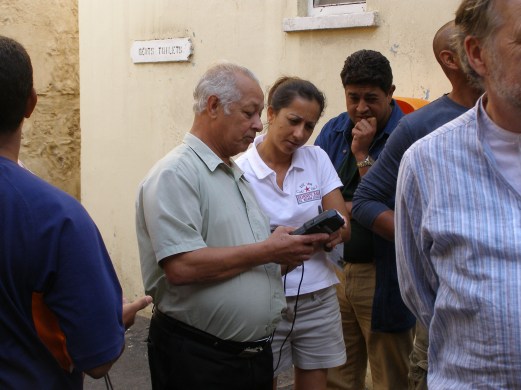