The three main streets of Jamestown had more to sell you than the essentials to cover your nakedness and fuel your activity. Several little boutiques were set up to sell the odd tourist a trinket or two; I got fond of buying the little bits of pottery made by Serena Thorpe – having first been attracted to a selection of them that were sold from Tasty Tucker’s on Ascension.   There was of course the post office too, selling the first edition stamps unique to St Helena and supplying one of the largest cuts of foreign income to the island. 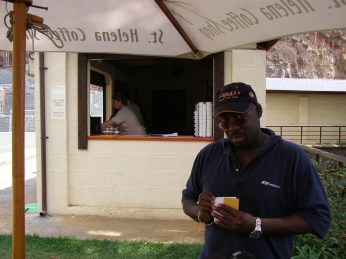 Lots of the services such as the post office and bank could be found up and down the island (although when I visited there was still no ATM).  Tucked into a corner of the front entrance to the main hotel was a barbers, owned by a couple who were  so different from most Saints with their trendy clothes and hairstyles and a much more extrovert attitude than I was used to.  But they did a good haircut too during my lunch hours.

And then there was the accommodation.  The Consulate Hotel above the barbers was the main one on the island.  Most of the visitors I met on the RMS were heading there, and I felt a bit special to be staying self catering somewhere else.  I could imagine life in the Consulate would be like a continuation of the RMS experience but without the peculiarities of being at sea.  My own experiences with the Consulate were restricted to a meal in their quiet dining room, and several visits to the infamous Friday night disco.  Nightlife in Jamestown seemed to be restricted to a couple of solid drinking pubs – we went in the White Horse one night; while there was no hostility there was not really a lot of atmosphere for anyone beyond the usual drinking buddies there.  The Consulate seemed the be the place to go for most young people and attracted tourists looking for a bit of colour.  I spent a few Friday nights down there crammed against the bar as people asked for their drinks or smooched around on the small dance floor.  We tried to find other alternatives, but they were few and far between.  On our first leaving we did have a wonderful meal at Wellington House, which also had rooms for tourists but gave us a relaxed and very enjoyable dinner with our colleagues before we headed back on the RMS.  Tucked into the Castle Gardens was Annie’s Place.  This tended to be the location for lunch, especially by government workers from the castle, although I did attend a couple of receptions there in the evenings.  Being open on two sides it was a bit draughty in the winter season when I first visited but was a lovely spot for the rest of the year, looking out over the well maintained borders of the gardens, the castle beyond and the dull rumble of the ocean beyond.

Castle Gardens (and Annie’s Place with the blue roof)