St Helena was formed by a volcano sitting over the mid Atlantic Ridge about 15 million years ago.  Sitting in the deep ocean, it must have taken millennia for any rock to break the surface, and the little island you can see today must sit on an immense pile of submarine mountain.  But any geologist will inform you that the material being spewed out from the mid Atlantic ridge is steadily moving apart.  Ascension Island was formed by a similar process and is moving westwards as it sits on the South American Plate, but St Helena was just on the other side of the divide and moved eastwards towards Africa.  More volcanic eruptions meant a second blob of land appeared to the west of the first and gives the slightly dog’s head look to its shape.  The second volcano partly smothered the deposits of the first and made one single island, with about 40 tiny islets around its perimeter.  In fact these little islands are more likely to have been loosely joined to the mainland for years and gradually eroded away.  About 7 million years ago eruptions in St Helena stopped, the island had drifted so far eastwards that it now was away from the ridge itself where magma from the earth’s interior is being spewed out, pushing the continental plates apart and forming new surfaces.  So now the mountains of St Helena are probably a lot smaller than they were.  Years of weathering have eroded the softer rocks into jagged peaks, or rounded off the massifs, and heavily incised the mountains to form the deep valleys with streams at the bottom.  Some are permanent streams, others are more often dry river valleys called guts.  I knew guts of old as they were a common name for similar temporary drainage features in the Caribbean, although there they were sometimes spelt Ghut.

Ascension Island had been formed in a similar way but much more recently, and still being close to the ridge it was still technically an active volcano zone although it has been several hundred years since the last eruption.  St Helena has had more time to attract the plants and animals on to the land.  As in all rocky regions the first to arrive are the lichens and mosses, the so called Bryophytes.  Ferns were probably next, the tiny spores carried hundreds, even thousands of miles.  Then flowering plants have managed to arrive.  Animals would not have been far behind.  Some insects and spiders had found their way, and many other invertebrate species, and sea birds had found an amazing secret place to colonise.  By some freak a land bird arrived, the wirebird, and somehow started to breed.

And that was probably it for millions of years, apart from one thing.  These animals, remote from their original gene pool, started to evolve separately till they became an endemic species, that is unique to one habitat location and unable to breed with their ancestral line.  The natural species found their niches at different elevations, or in the wetter or drier part of the islands, or mutated over many generations to better cope with the conditions they found. 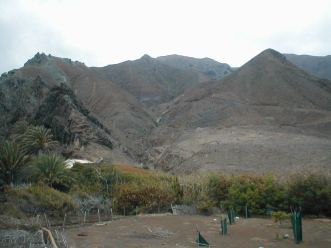